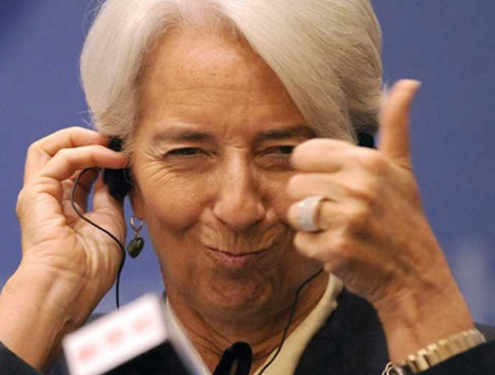 European leaders will now only begin their sit-down session at 1300 GMT after the start time has been delayed since the morning. Of course, all of this is happening as everyone is scrambling to negotiate with their respective parties and counter-parties in order to work out an agreement for who will take up Europe’s top jobs.

The latest update sees IMF chief, Christine Lagarde, emerging as a possible frontrunner to succeed Draghi as ECB president, according to Bloomberg. Frans Timmermans is said to remain as the main candidate to become European Commission president but is encountering opposition from several nations from Eastern Europe.
There’s also talk that we could see a split as per the following in order for all parties to try and reach some form of agreement, although I doubt most countries will be happy with Germany taking up the European Commission presidency and still having Manfred Weber chair parliament for 2.5 years:

END_OF_DOCUMENT_TOKEN_TO_BE_REPLACED

The deal will also involve the International Monetary Fund and is expected to include 22 billion euros of funding for Greece, sources said.

It is now up to European Union President Herman Van Rompuy to call a summit of eurozone leaders possibly later tonight to consider the French-German deal, after talks attended by all 27 European Union heads of state.

The meeting would ask Van Rompuy to draw up detailed plans “before year end to show all the options possible” for bailing out eurozone nations in future. That would include preventive measures and sanctions, a diplomat said.

Spanish government spokeswoman Cristina Gallach said she could not confirm any deal but that Spain – which heads most European Union talks because it holds the EU’s rotating presidency – was “hopeful” that a solution could be found at the talks for Greece’s debt woes.

END_OF_DOCUMENT_TOKEN_TO_BE_REPLACED

Time for European headlines. Because we haven’t had any in about 3 minutes or so. Courtesy of Bloomberg, here is Angela Merkel doing her best channeling of Hank Paulson.

True, many, many strokes will be needed. But what about the market which has already priced in not only the Magic Wand but the Quidditch match victory over Slitherin. What now?

END_OF_DOCUMENT_TOKEN_TO_BE_REPLACED

The question of EU financial aid to debt-stricken Greece is marred by contradictory reports of a bailout. The European Commission and the German government both denied the existence of an alleged €20-25 billion bailout plan as an EU mission landed in Greece yesterday (22 February) to assess the country’s rescue plans.

A Commission official denied allegations that the EU is reviewing a bailout package for Greece to the tune of €20-25 billion after the Germany’s Der Spiegel magazine allegedly got hold of a paper from the country’s finance ministry detailing the terms of Berlin’s contribution.

The EU formalised its support for a Greek rescue, should the time come, at an EU summit two weeks ago, but member states refused to say how much a bailout could cost and how the money would be raised (EurActiv 17/02/10).

“Greece has not requested a single euro,” the Commission official told the press, rejecting claims that calculations of individual member states’ shares of a bailout were afoot.

END_OF_DOCUMENT_TOKEN_TO_BE_REPLACED

The fiscal emergency in Greece and the turbulence in debt markets are threatening to overshadow this week’s EU summit on business competitiveness. The problem poses a leadership test for Herman Van Rompuy, the EU’s first permanent president, who called the meeting. Greece’s debt crisis, and the risk of eurozone contagion,  are not on the summit’s official agenda, but leaders fear the impact on financial markets if the summit does not address the worst crisis to strike European monetary union since its launch in 1999.

END_OF_DOCUMENT_TOKEN_TO_BE_REPLACED

As the United States and China battle over the finer points of currency manipulation at the G-20 summit, American negotiators may want to take note of this startling testimonial to the productivity of Chinese workers: A construction crew in the south-central Chinese city of Changsha has completed a 15-story hotel in just six days. If nothing else, this remarkable achievement will stoke further complaints from American economic pundits that China’s economy is far more accomplished than ours in tending to such basics as construction.

The work crew erected the hotel — a soundproofed, thermal-insulated structure reportedly built to withstand a magnitude 9 earthquake — with all prefabricated materials. In other words, a crew of off-site factory workers built the sections, and their on-site counterparts arranged them on the foundation for the Ark project.