The government is reportedly going to be pouring another ¥100 trillion at least in a new round of stimulus package, and that is helping to give the Nikkei a bit of a lift today.
The mood elsewhere in the region is more mixed with the Hang Seng down by 1.0% and the Shanghai Composite down by 0.2%, with the former dragged lower amid the clash between protesters and the police in Hong Kong.
US futures are keeping higher by about 0.6% though, but after the setback yesterday, major currencies are keeping on their toes in response to start European trading.
The dollar is a little firmer across the board, but nothing too overwhelming for now. AUD/USD is down 0.2% to 0.6640 while EUR/USD is also lower by 0.2% to 1.0960.
END_OF_DOCUMENT_TOKEN_TO_BE_REPLACED

There’s still a high degree of uncertainty involving the new coronavirus outbreak situation and that is keeping markets very nervous to kick start the week.

Chinese markets may be closed but A50 futures are taking a beating – even down by over 5% earlier – as risk aversion continues to flow throughout markets.
US 10-year yields are down to their lowest level since October, 4.8 bps lower on the day at 1.635% as we look towards European trading. Meanwhile, the likes of the yen and gold are bid as safety flows are the name of the game to start the day.
USD/JPY sits at 109.05 currently while commodity currencies such as the aussie and kiwi are also being weighed lower, alongside the offshore Chinese yuan.
END_OF_DOCUMENT_TOKEN_TO_BE_REPLACED

It’s rare to see the Swiss franc and Japanese yen at opposite ends of the FX leaderboard. They generally move in the same direction because they’re both low yielders and safe-haven currencies.
So what happened? One argument is that this was a Swiss idiosyncratic move:
I wouldn’t disagree with any of those factors but it’s still a stark difference. The other argument is that this run-up in risk is driven by leverage from cheap money, retail chasing momentum and year-end effects.
Ultimately, the market will have to answer but I just can’t get behind this run in risk until we see a bit more alignment in equities with FX and bonds. 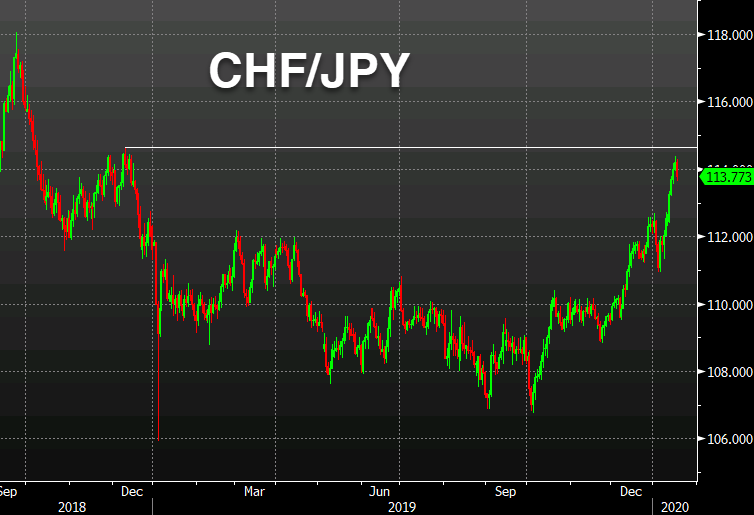 75% of the price movement in most stocks takes place in 20% of the time.The rest is notingbut noise withing a range.Relevant information that causes repricing doesn’t change quickly and frequently.This is why trends exist .Higher prices often attract more buyers and lower prices attract more sellers untull the rules of the game change.Focus on the main drivers and forget the rest.

END_OF_DOCUMENT_TOKEN_TO_BE_REPLACED

These are stocks that jump 100%, 200% or more in a span of several days. The top of the pattern is marked by buying exhaustion and the best way to determine the exact top is to look out for the following candlestick patterns: doji, gravestone doji, long-legged doji, shooting stars, dark could covers, and bearish engulfings. All patterns are typically accompanied by the highest volume bar on the entire chart. Entering on the topping day may provide more profit, but it is riskier. The next day is considered the confirmation day in which the stock breaks down. The 2nd option for entry (less risk) is to enter at the very beginning of the breakdown.

END_OF_DOCUMENT_TOKEN_TO_BE_REPLACED

There are so many concepts about the stock market that are taught in the classrooms, promoted throughout the media, and passed along from generation to generation but, unfortunately, most of them are FLAT OUT WRONG!

I decided to write a 5-part series (this is part 2 of 5) on the common misconceptions that really need to stop being promoted. Keep in mind, these are all my humble opinions, but after 16 years of trading and studying market history, one really begins to notice what works and what doesn’t.

Paul Tudor Jones is one of the greatest traders in market history. Why? Because he’s consistently profitable. The best “anything” in the world are the best because they perform at a consistent, superior level for long periods of time. Michael Jordan isn’t considered the best basketball player ever because he scored 30 points ONCE in a game. It’s because he averaged 30 points per game over his ENTIRE career. END_OF_DOCUMENT_TOKEN_TO_BE_REPLACED

END_OF_DOCUMENT_TOKEN_TO_BE_REPLACED

1. Trading an inappropriate position size.
Simply put…if you risk too much, you’ll lose too much. In my eyes, this is the single most important rule of trading. Risking only 1-2% of an acct value is crucial to staying in the game.

2. Not knowing when to take the loss.
If you cannot answer the questions “Where am I taking the loss,” and “Where is my profit target” then stay out of the market. If you leave these decisions for later, then you will make them emotionally, which will be the worst decisions a trader can make.
3. Trading on someone else’s research or recommendation.
We have all heard stock tips thrown our way. Sometimes we might even hear people throw out potential trades that they are watching and become tempted to jump in. Sometimes I throw out stocks that I am trading and I am watching. The problem is that you might not know what this person is watching for, what strategy this stock fits, or what types of efforts are thrown into their research. If you take these stocks into consideration, make sure they are trades you would have likely come across on your own by conducting your own research. END_OF_DOCUMENT_TOKEN_TO_BE_REPLACED

END_OF_DOCUMENT_TOKEN_TO_BE_REPLACED

and to paraphrase Will Rogers: Buy only stocks that will go up. Don’t buy the ones that don’t go up. “THIS is GAMBLING.”