This re (yet another) mass  shooting in the US

So far the multi-millionaires in Apple’s management have refused to unlock two phones used by the shooter. 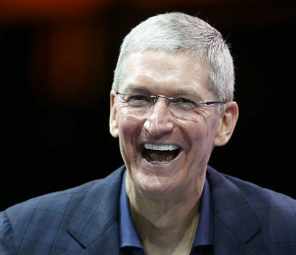 All the way to the bank
Trump’s Tweet:
END_OF_DOCUMENT_TOKEN_TO_BE_REPLACED Minoru Yoneyama, a former prisoner of war who founded Japanese sports equipment maker Yonex, a favorite among pro tennis players, died on Saturday at the age of 95.

Yonex’s rackets have been used by such tennis stars as Billie Jean King, Martina Navratilova and Kimiko Date, garnering worldwide attention for a company that started out making fishing gear.

Yoneyama was born in Niigata Prefecture, north of Tokyo.

No stranger to adversity, he entered into business after being released from a prisoner of war camp in Okinawa. He was part of a Japanese suicide unit meant to ram explosive-laden boats into American transport ships, but never received an order for a mission.

In 1946, Yoneyama started making and selling floats for sport fishing. He began producing badminton rackets in 1957, and they remain one of the company’s mainstay products. In 1958, Yoneyama established Yoneyama Co. to focus on rackets. It moved into tennis in 1969, followed by golf in 1982. The company was renamed Yonex and moved its headquarters to Tokyo.

Yonex secured contracts with King and other leading tennis players by asking them what they wanted in a racket, then improving the performance and design step by step until they were satisfied.

Yoneyama’s motto was, “If you fall, pick yourself up as a bigger man.”

His resilience was put to the test when a racket factory burned down in 1963. In just three days, the company was able to put up a new facility and resume production. China’s Shi Yuqi in action at the Yonex All England Open Badminton Championships in 2018. Beyond tennis, the brand is well known in badminton-mad Asia.   © Reuters
END_OF_DOCUMENT_TOKEN_TO_BE_REPLACED

It notes falls in sovereign bonds outside of Japan also of course, “driven by an unusual outbreak of optimism about the global economic outlook”
With “some analysts say they bear the fingerprints of trend-seeking computerised hedge funds scrambling to cover losses”
The FT is gated, but if you can access it, here is the link 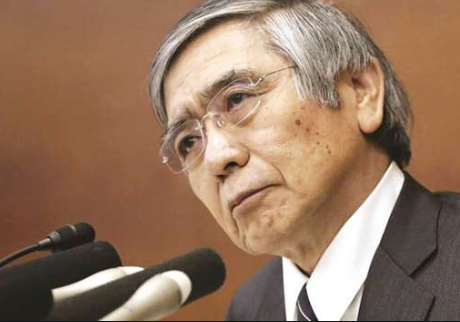 END_OF_DOCUMENT_TOKEN_TO_BE_REPLACED

After an early ping pong pause at target levels, the pair shot higher.

In a post yesterday (on other GBP pairs technicals) I outlined levels of importance for the pair after the sharp moves higher.   Below is the chart from that post. 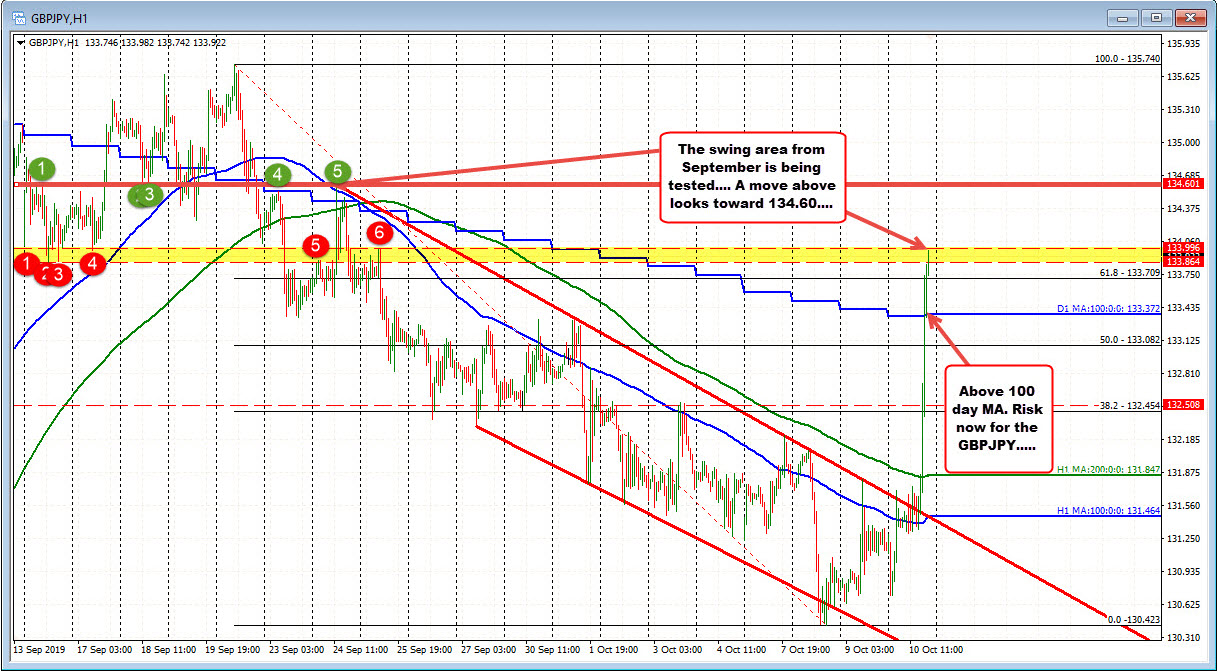 At the end of yesterday and into the Asian session, the price of the pair ping-ponged between the 134.60 level above and the 133.86-99 level below.  The price based one last time at the support area (yellow area), broke above the 134.60 level and did not look back.  This is what that looked like: 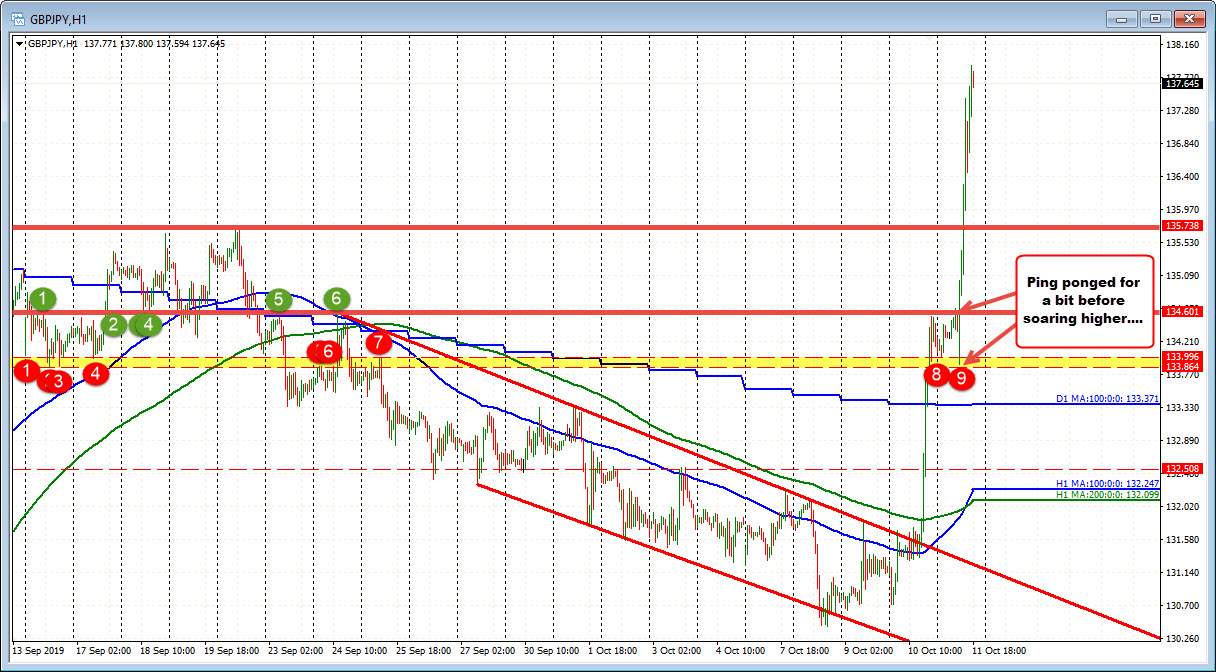 What now?
Taking a broader look at the daily chart, the pair has moved above swing levels and currently is testing the 50% retracement of the 2019 trading range at the 137.702 level. The price is also trading at the highest level since June 2019.  There is some pause around the midpoint. However, the buyers still remain in control, and the lure of the 200 day above at 138.588, may be the magnet target for the move. 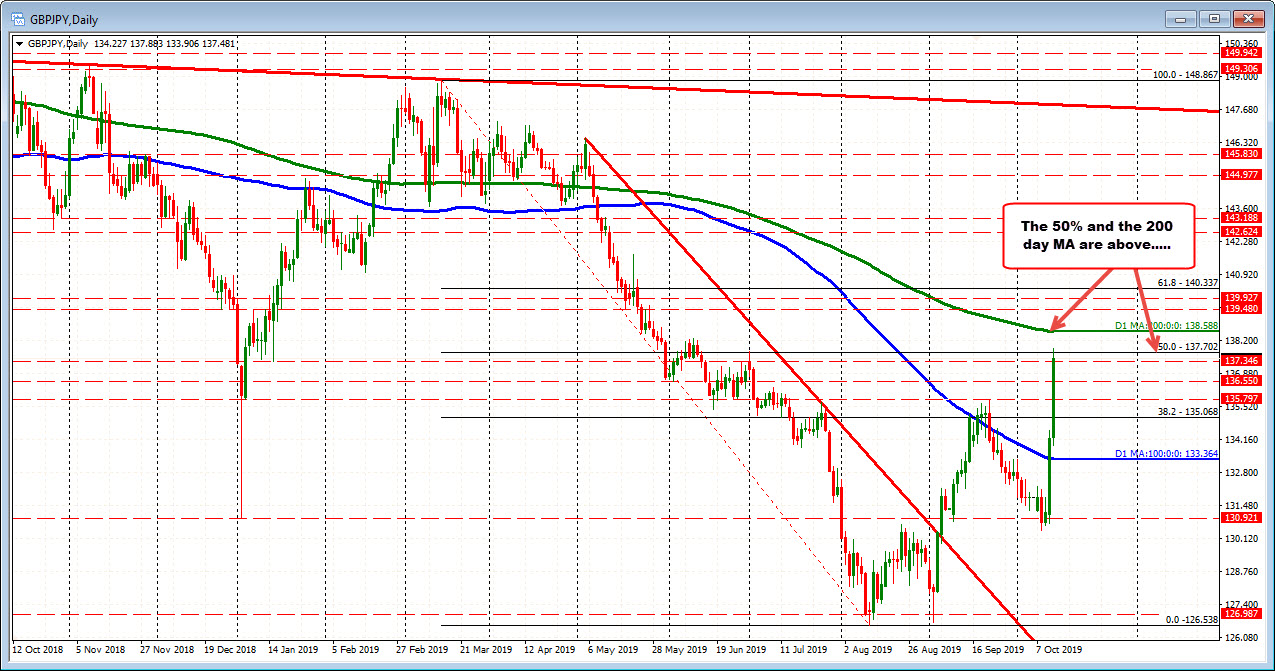 The GBPJPY is getting a double boost from hope for Brexit and hope from US/China (that is propelling stocks and yields higher).  That is the right cocktail for the explosive currency pair.
END_OF_DOCUMENT_TOKEN_TO_BE_REPLACED

Trading is the most difficult of sports: nowhere else does one begin a career by opposing the world’s most accomplished professionals.
Extreme trading size produces extreme emotional outcomes, leaving traders with certain trauma or addiction.
A universal trade setup: Hope, then despair.
Fidelity to purpose: the mark of good trades and great traders.
Mentors cannot achieve more for you than they have accomplished for themselves. END_OF_DOCUMENT_TOKEN_TO_BE_REPLACED

END_OF_DOCUMENT_TOKEN_TO_BE_REPLACED

The rules are not hard to understand. Recognizing a profit from a loss is simple. If the rules are easy to grasp and a profit is distinguishable from a loss, where does the problem lie? What makes it so hard to apply the rules? There is something within each of us that has a power over our minds that prevents our acting according to what we have agreed is the proper course of action. That something is present in all of us and is very powerful, more powerful than anything I know. Let’s call it ego. Until we learn to get rid of our ego, we will never make money in the market consistently. Those who haven’t identified the ego’s ways will eventually be destroyed in the market because of their ego’s tendencies. It is just that powerful. The market rewards those who have subdued their egos. Those who rid themselves of their egos are rewarded greatly. They are the superstars of their fields. In the market, rewards come in the form of profits. In the world of art, masterpieces are the results. In sports, the players are all-stars and command enormous salaries. Every pursuit has its own manifestation of victory over the ego.

END_OF_DOCUMENT_TOKEN_TO_BE_REPLACED

2. Always have a plan going into a match, and a backup plan.

3. Always have a surprise to pull out all the stops.

4. Reconnoiter your opponent before the match for his strengths and weaknesses.

5. Have a general strategy against all power players, and another against all control players.

6. Analyze every match – how would you play it differently next time.

7. Keep a log of your strategies, and of the opponents.

8. Always have a customized strategy against each opponent, if possible.

9. Call a timeout whenever you skip two straight shots, or the opponent runs three straight points.

10. Keep a coach in the crowd for a second opinion. END_OF_DOCUMENT_TOKEN_TO_BE_REPLACED

END_OF_DOCUMENT_TOKEN_TO_BE_REPLACED

You need big winners to pay for all your little losses. When the opportunity of a high probability entry happens you must take it. Or if you are trading a trend following system and are in a draw down you must keep trading in the direction of the trend so you will catch the big wave when it hits.