The dollar is falling after the 50 BP cut by the Fed:

What drove markets this week 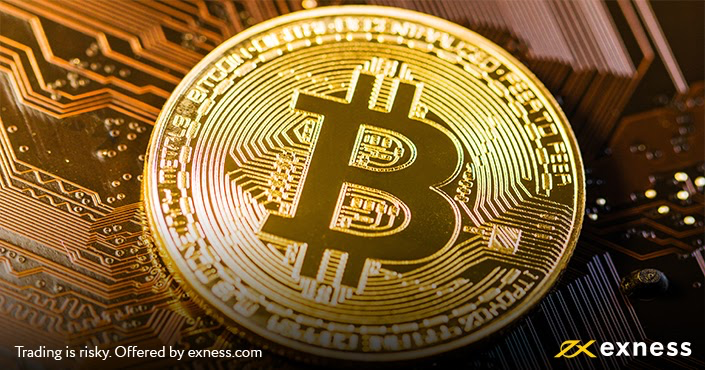 The dollar has generally made some gains this week against various currencies. These movements came after fairly good data from the USA as well as the signing of a first stage trade deal between the USA and China.

Some of the biggest news in forex markets this week came from central banks. Both the South African Reserve Bank (SARB) and the Central Bank of the Republic of Turkey (CBRT) cut rates against expectations. The CBRT was first yesterday morning, cutting its one-week

Then the SARB also cut its repurchase rate to 6.25% yesterday afternoon, another decision that defied expectations. In a rare display of agreement among central bankers, the SARB’s

Shares reacted eagerly to news of the preliminary Sino-American trade deal, with US500 continuing its rapid gains since Monday’s open. Many European indices and shares also reached new all-time highs. 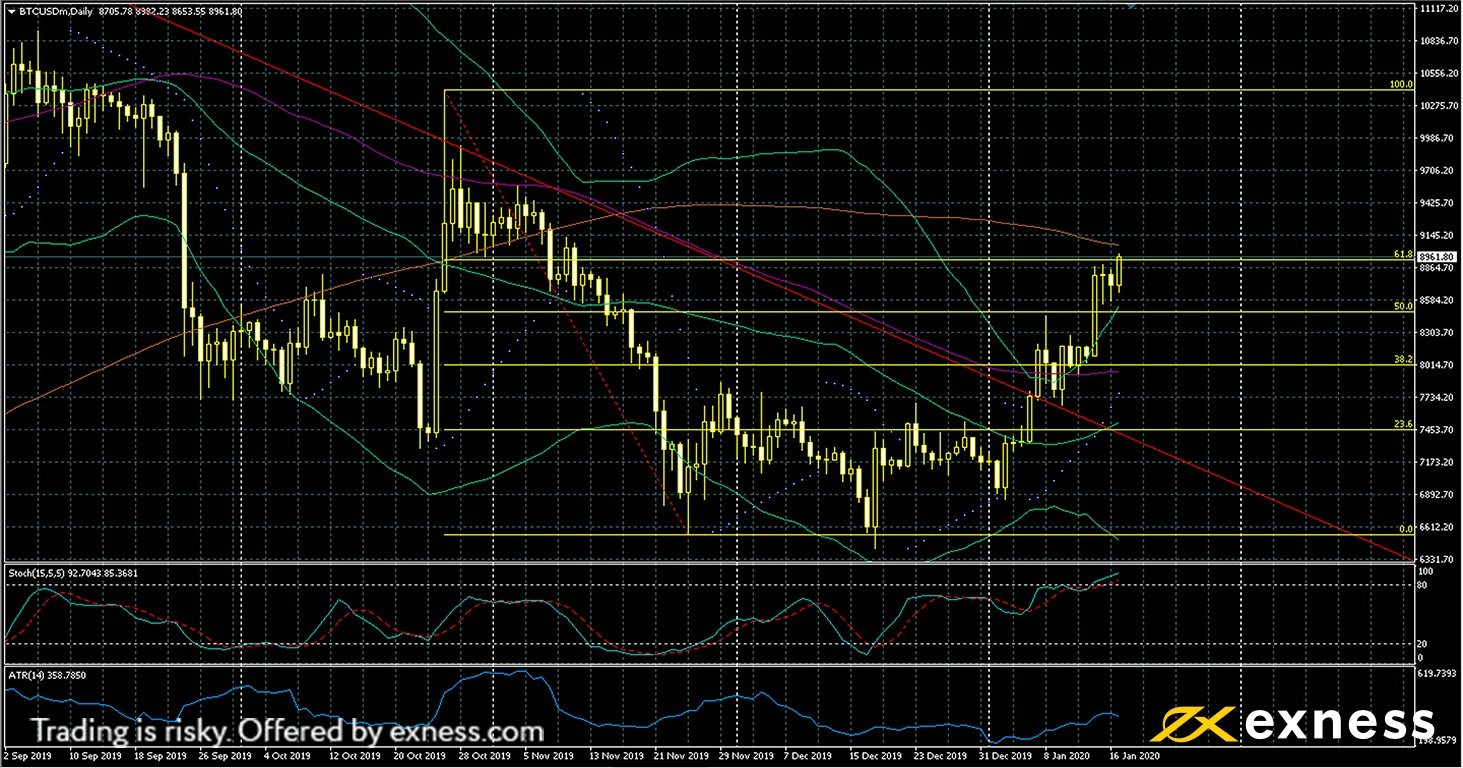 BTC-USD has surged up even more in the second half of the week. Current levels around $8,900 are the highest for about two months. The red trendline here is based on the weekly chart, starting from last summer’s highs around $13,000.

We can clearly see that price has broken out upward from this trendline, facing little resistance from the 100-period simple moving average.

The first major hurdle for the bulls here is likely to be the 200-day moving average. This is expected to be a strong area that could well resist testing at least temporarily. The 61.8% Fibonacci retracement area which price is currently testing could also function as a resistance.

The slow stochastic (15, 5, 5) is also clearly within the upper trigger zone. These factors would suggest that a retracement to some degree is likely within the next few periods. 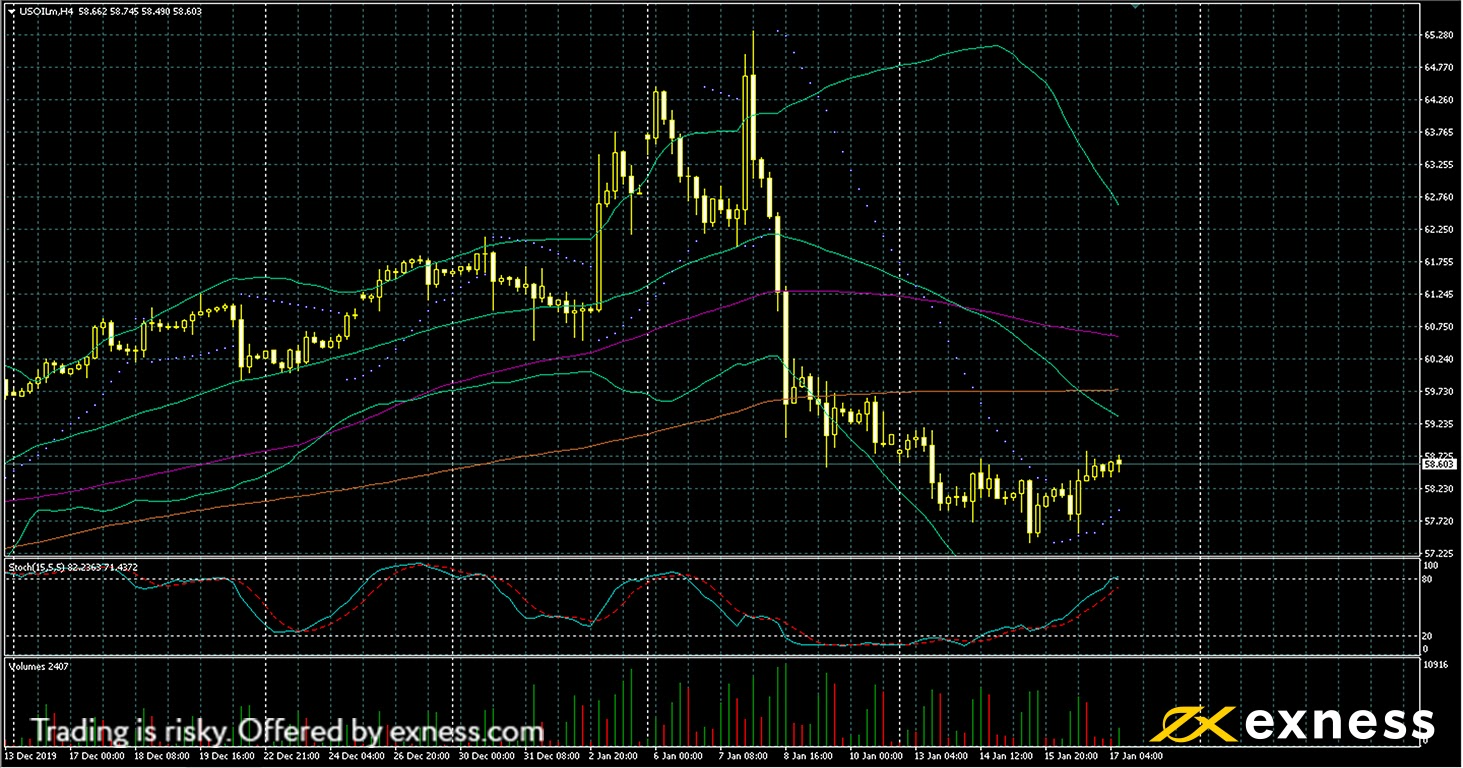 USOIL’scorrection appears to have paused for now. The large losses from last week’s nine-month highs were driven mainly by the decline of military tension between the USA and Iran in Iraq. Now, though, the signing of the first stage deal between China and the USA has given crude a significant fundamental boost.

As China is the world’s biggest consumer of crude oil, the outlook for the Chinese economy often influences the price of the commodity.

The regular data for crude were somewhat incompatible this week. The API’s stock change announced a gain of 1.1 barrels per million, but the EIA’s stock change read negative 2.55 million on Wednesday night.

USOIL didn’t react very strongly to either release, so we might expect that trade and Chinese data could continue as key drivers next week as well.

From a technical standpoint, the conditions seem to be there for oil to continue its overall uptrend from Q4 2019. Momentum to the downside has dried up this week while buying volume remains fairly high. 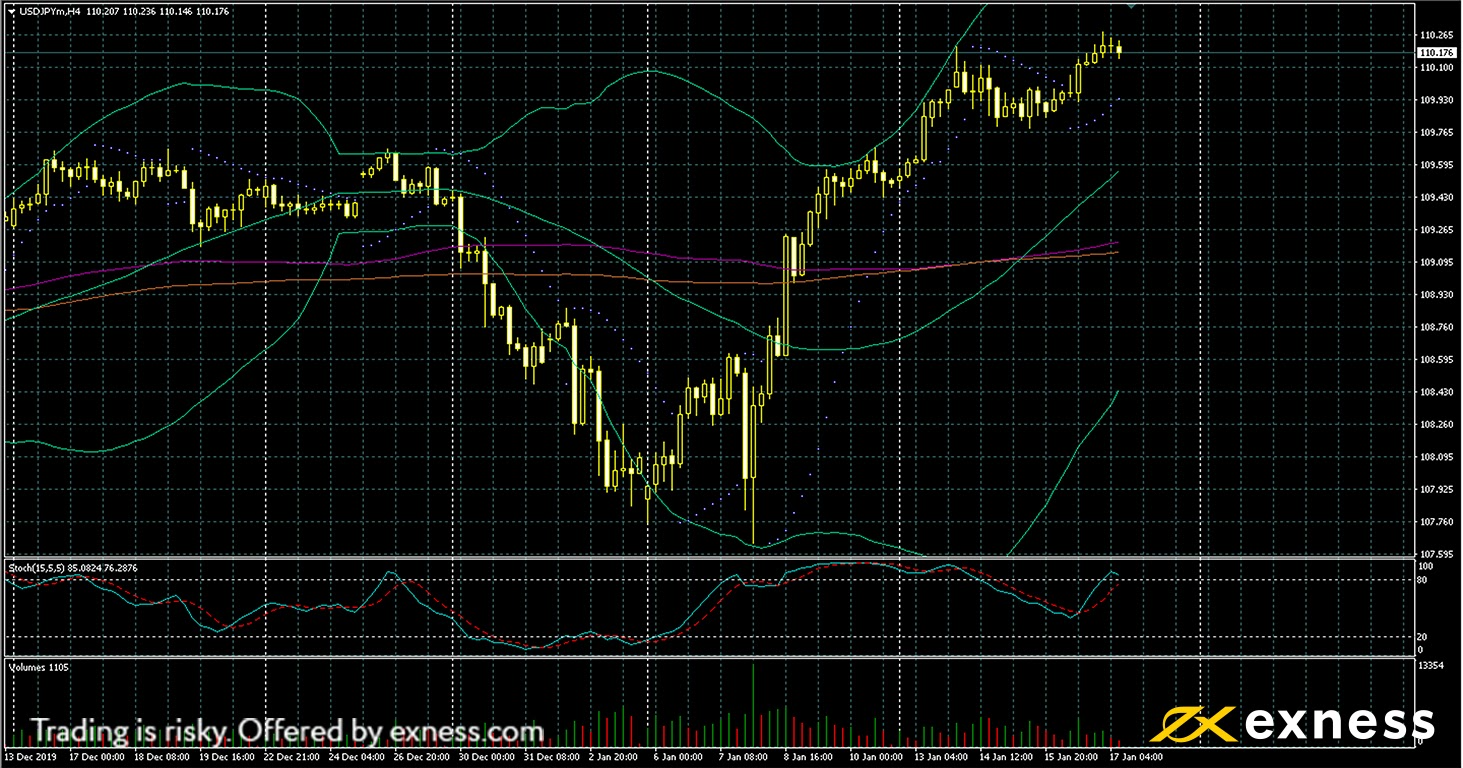 USD-JPY has been somewhat less volatile this week while continuing to make some gains overall in the aftermath of decent data from the USA. Annual inflation and core inflation on Tuesday both printed 2.3% in line with expectations, the former beating the previous figure by 0.2%.

American retail sales came in at 0.3% yesterday afternoon in line with the consensus, but November’s release was revised upward slightly.

The charts look positive for dollar-yen but buying saturation could limit any ongoing gains. Price remains above all three of the usual moving averages, with the faster 50 SMA completing a golden cross of the slower two on Wednesday afternoon GMT.

On the other hand, volume remains very low, and the slow stochastic is still slightly inside the overbought zone.

It seems that most traders are waiting for key releases next week to provide some momentum, up or down. The Bank of Japan’s meeting on Tuesday morning and Japanese inflation late on Thursday evening are expected to bring some more direction to USD-JPY.

END_OF_DOCUMENT_TOKEN_TO_BE_REPLACED

And that is helping to see EUR/USD linger near the 1.1000 handle with the low today reaching 1.1003. Sellers remain in near-term control of the pair but trading may be a bit more tepid for now as we look towards a barrage of data to come from the US later.
That will be the key risk event for the dollar and also for EUR/USD in trading today.
But let’s take a look at what are the key levels that buyers and sellers may look to lean on should we see price action move around later on.
The 1.1000 level in itself is already a key one to watch but add in large expiries rolling off today around 1.0995-00, it only makes the figure level more of a magnet for now.
Below that, the 14 November low @ 1.0989 will be a notable one to watch as well. A fall below that will accelerate momentum to the downside for sellers.
Meanwhile, for buyers, any move higher needs to work towards breaking the 100-hour MA (red line) @ 1.1032 first before challenging the 200-hour MA (blue line) @ 1.1049.
A break above those two levels will see buyers reclaim near-term control before potentially moving towards a test of the 100-day moving average @ 1.1080 with further swing region resistance seen around 1.1090-00 next.
Those will be the key technical levels to watch out for now but how price action will play around these levels will depend on how the slate of data from the US plays out later today.
END_OF_DOCUMENT_TOKEN_TO_BE_REPLACED

What is the outlook for the US dollar 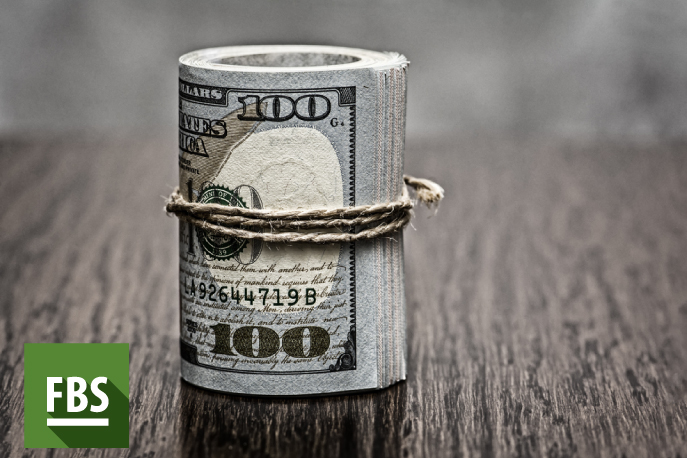 The USD has been steady versus a basket of major currencies since the start of 2019. The dollar index is trading close to September highs, which, in turn, are at the maximum levels since 2017.

The current week, however, hasn’t been very positive for the American currency. So, what future awaits it? In this article, you will find the fundamental outlook for the greenback.

US economy has faltered

Life shows that it’s not possible to fight in trade wars and stay unharmed. The data released on Tuesday showed that the US manufacturing sector is in its worst condition in a decade: ISM Manufacturing PMI dropped from 49.1 to 47.8 in September.

A reading below 50 indicates industry contraction. Given how low the latest number is, it’s certain that even if the underlying picture changes and positive factors come into play, the situation won’t be able to improve fast.

And so far, there are few reasons to believe that the United States and China will achieve a big breakthrough in their negotiations. Representatives of the nations will meet next week on October 10 and 11.

Although soothing comments may cheer the stock market, it will take the mutual renunciation of tariffs to amend the damage done to the economy. If talks fail, there will be more tariff hikes in the following months and hence an even stronger economic pain.

Remember that everything is interdependent in the economic world. Considering the external troubles, it’s now up to US consumers to drive economic growth. For them to be able to do that, they need ample wages.

END_OF_DOCUMENT_TOKEN_TO_BE_REPLACED 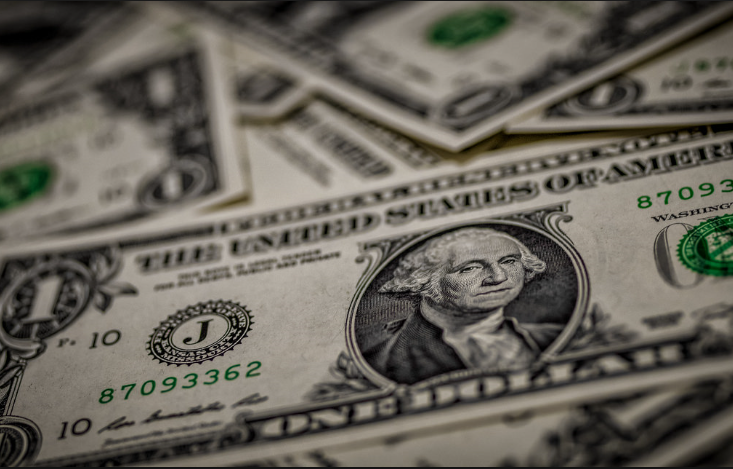 The US dollar share of global currency reserves fell to 61.63% of the total in Q2, according to the IMF. That’s down from 61.86% in Q1 and is the lowest since 61.27% in Q4 of 2013.
In terms of the total value, there was no selling of US dollars. They totaled $6.79 trillion compared to $6.74 trillion in Q1. Instead, it was the growth in reserves of other currencies that tilted the balance.
In particular, yen reserves grew to 5.41% of the total, which is the most since 2001. Chinese yuan reserves also hit 1.97% from 1.95% while the euro rose to 20.35% from 20.23%.
END_OF_DOCUMENT_TOKEN_TO_BE_REPLACED
Whilst the origins of the term ‘Dollar’ and its transformation to common usage in the US appear to follow a well laid-out path. The evolution of the $ sign itself is somewhat more uncertain. There are a number of competing theories, each of which are seemingly possible, though some with more credence than others.
The most likely is the theory that it comes from a handwritten ‘ps’, an abbreviation used in correspondence as a plural form of ‘Peso’. Manuscripts from the late 18th and early 19th century show the ‘s’ gradually being written over the ‘p’, and the upward stroke of the ‘p’gaining dominance over the curved upper part. This eventually developed into something resembling the ‘$’ sign. (see below)

The ‘ps’ symbol first occurs in the 1770s, in manuscript documents of English-Americans who had business dealings with Spanish-Americans, and it starts to appear in print more commonly after 1800. – This does not however explain why sometimes the $ sign is drawn with 2 lines running through it.

END_OF_DOCUMENT_TOKEN_TO_BE_REPLACED

The rouble climbed to its strongest level since July 2015 on Monday morning, as the Russian Central Bank’s pledge to weaken the currency struggles to convince markets.

The rouble had already been appreciating as oil prices have recovered over the last twelve months, and growing optimism since Donald Trump’s victory in the US election has helped it become the best-performing emerging market currency since the vote, up just shy of 10 per cent.

President Trump’s calls for a normalisation of relations with Russia raised hopes of a relaxation of economic sanctions and encouraged international investors to return to the country.

The central bank has promised to spend more than Rbs113bn ($1.9bn) on foreign currency purchases this month to help slow the rouble’s climb, in an effort to boost the government’s spending power.

However, economists have been sceptical the bank would be able to have a big impact on the currency, and it has continued to rise a further 1.6 per cent since the announcement, including a 0.5 per cent rise this morning to take it to 57.99 per dollar.