Big focus on a second US wave 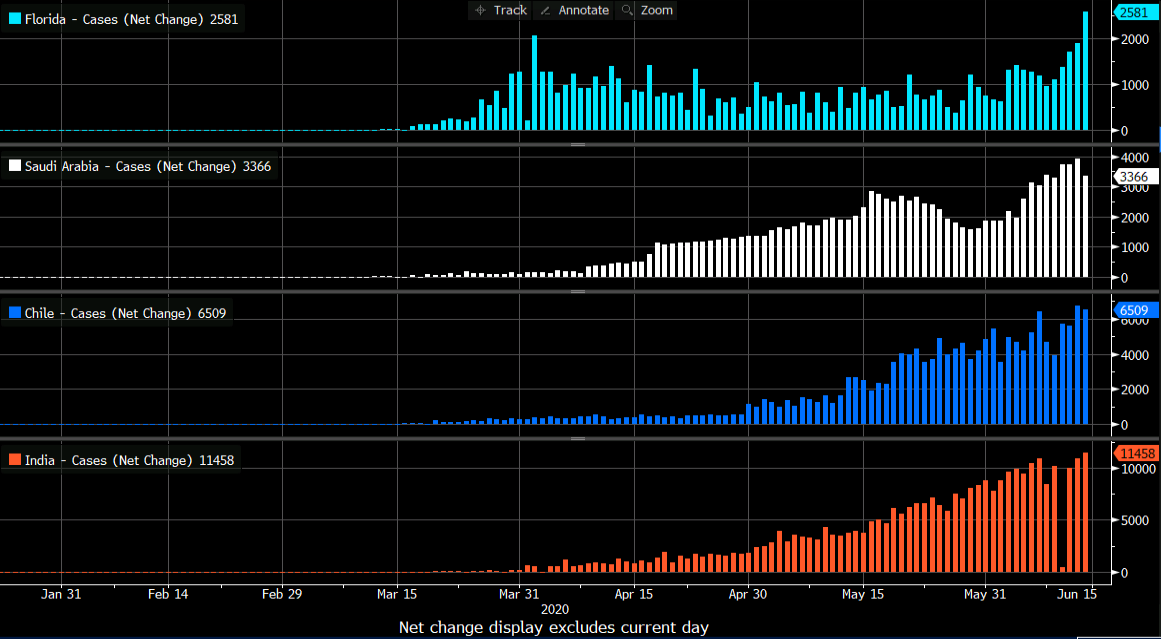 The market has turned its focus away from the reopening story and back to the virus; and the risk that even with the economy reopened, no one is going to show up.
The main theme at the moment is rising cases in a number of US states, along with growing cases in Latin America and India.
The US is a complicated picture. New York has drastically curtailed cases, which rose just 0.2% yesterday.
The fear is that numbers continue to climb elsewhere. Yesterday, total US cases rose 1.4%, which was the biggest jump so far in June. There are a handful of states showing an acceleration. Here’s a short list, with the % increase in cases yesterday:
Those are some of the most-populous states in the country but there are some important things to keep in mind. Florida, for instance, has 73.5K cases total, which is a fraction of the 382K in New York.
The weekend headline that got the most attention was the jump in Florida cases to 2581 from the previous day (also a record) of 1902. That looks like a dangerous escalation but Florida Governor Ron DeSantis has downplayed the rising totals, saying it reflected increased testing, isolated outbreaks in long-term care facilities along with more testing at prisons and among migrant farm workers.
Other virus news:
Overall, the virus theme is beginning to overwhelm the easy-money theme and fear is starting to creep back into markets. The bounce late on Friday was constructive but I expect we will start the week with a negative tone.
END_OF_DOCUMENT_TOKEN_TO_BE_REPLACED