That brings the total confirmed cases in the country to nearly 2.4 million

India is among the countries that have been hit the hardest by the pandemic as the struggle to balance between the health crisis and the economic fallout is particularly stark.

As for the health crisis, the bright side is that over 1.6 million of those infected has recovered from the disease. However, the spread is still outpacing the number of recoveries: 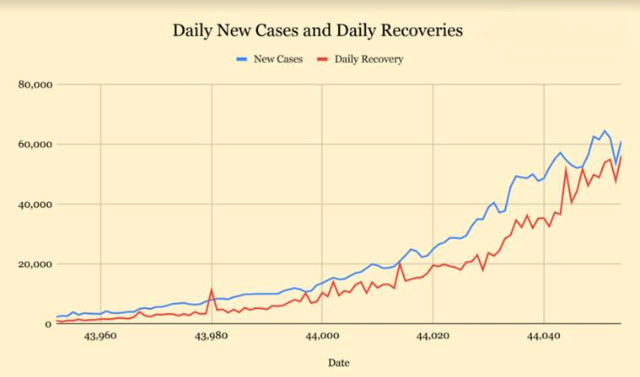 At the start of July, India reported ~220,000 active cases in the country. That figure is now ~643,000. The only positive – if you really want to look at it that way – is that the mortality sits at just ~1.9%. That is better than the ~3.2% seen in Brazil and the US.
In the bigger picture, as long as the health crisis worsens in India, it will have an impact on the global economic situation in general. Before the pandemic, there have been talks that India’s share of global growth might rival that of US, China in the next decade.
They were already among the top five – some would argue top three – contributors of global growth over the past few years, so any major setback to India will also be a setback for the global economy in that sense.
END_OF_DOCUMENT_TOKEN_TO_BE_REPLACED

And this is year old.
If possible …Just have your comment.

END_OF_DOCUMENT_TOKEN_TO_BE_REPLACED

-Above is the Monthly chart of Shanghai Composite.

Trend Reversal will be above 3200 level.

I will Update more (Next week ).

END_OF_DOCUMENT_TOKEN_TO_BE_REPLACED

The underlying concept is, that, if we cannot accurately predict our own performance, and as we cannot influence how the markets will behave, we should at least exercise control over those variables that we have actually control of. And that is the risk that we as traders take when entering a position.

Pay more attention to the technicals

Today ,JUST have a eye on 91 level.Crossover will create unexpected buying and in minutes will kiss 101……………….& there after upperlock.