Meanwhile, 10-year French and Spanish bond yields have both climbed to their highest levels since May 2019 to start the day. This comes as we also see Treasury yields rebound higher, with 10-year yields up by 10 bps to 0.82% currently.
It is tough to try and make sense with what is happening in the market because things change so quickly but I would argue that the selloff in European bonds isn’t exactly a good sign for the euro currency in general.
I would say the rise in Treasury yields represents a bit of a disconnect because the move higher there reflects more closely the slightly better risk mood today – which is also helping USD/JPY to stay underpinned, alongside gains in the dollar today that is.
END_OF_DOCUMENT_TOKEN_TO_BE_REPLACED

The bottom continues to fall out 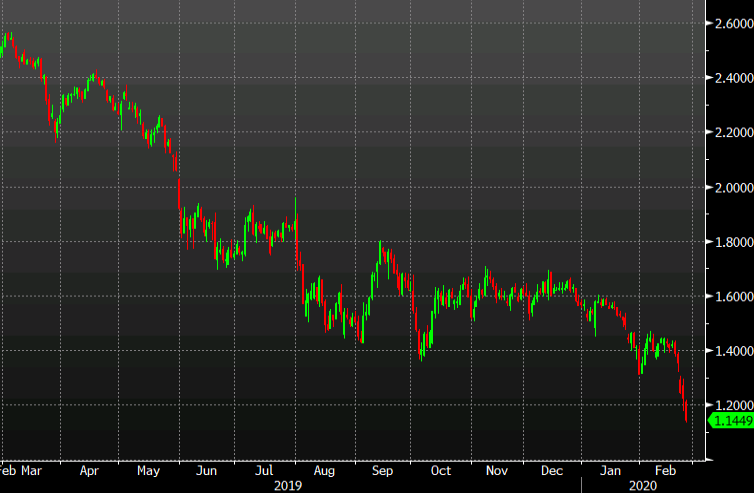 US 2-year yields are now trading more than 40 basis points below Fed funds. The odds of a March 18 cut in the OIS market have risen to 35% from 6% last Thursday.
Many market participants are deciding that they would rather get 1.14% for the next two years than hold stocks. If you believe this is going to be a pandemic, that’s entirely reasonable because the Fed will cut to zero and the dollar is always does well in times of trouble.
It’s incredible how the thinking in markets can go from ‘return on capital’ to ‘return of capital’ in a few days.
END_OF_DOCUMENT_TOKEN_TO_BE_REPLACED

Treasury yields fall across the curve to session lows

10-year yields are down by 2.5 bps to 1.644% as yields slip across the curve to start the European morning. While equities are holding higher, the bond market is sending a different signal with regards to positioning ahead of the trade talks outcome.
Essentially, this is what is holding yen pairs back from moving higher on the day with USD/JPY still seen near flat levels at 108.00.
Markets are mixed and a bit paralysed at the moment as everyone is just waiting to see what happens to talks in Washington later today. I reckon that will remain the case ahead of North American trading before we get more trade headlines to work with.
END_OF_DOCUMENT_TOKEN_TO_BE_REPLACED

Yet another UK trader is being punished by overzealous regulators for an accomplishment that should instead have earned him accolades: Outsmarting the machines.
In a case that echoes some of the circumstances surrounding the scapegoating of former UK-based trader Nav Sarao, former Bank of America Merrill Lynch bond trader Paul Walter has been fined 60,000 pounds by the FCA for a practice that regulators call ‘algo baiting’.
Algorithm baiting is similar to spoofing – a practice that has been banned by stock-market regulators as those markets have embraced high-frequency trading practices that have broken markets and made them more vulnerable to this type of manipulation. But fixed income markets, like the Dutch loan market Walter is accused of manipulating, have been slower to embrace HFT-type trading. Because of this delay, Walter is a pioneer. Using BrokerTec, a popular fixed-income trading platform, Walter would place a bunch of bids for a given bond, triggering trend-following algos to follow suit. Then he would quickly cancel the bids. Here’s a more complete explanation per the Financial Times.

Mr Walter entered bids for Dutch state loans that pushed up their price. Then, when other algorithmic trades followed him in response and raised their bids, Mr Walter sold to them and cancelled his quote. This happened 11 times between July and August 2014 while he was working for the bank, the FCA said, while on one occasion he did the opposite. He netted a total of €22,000 profit from this “algo baiting”.

Mark Steward, the head of FCA enforcement, said the FCA would remain “vigilant” in detecting abusive practices like “algo bating”. Of course, programmers could also build better algorithms, stamping out the practice without any help from the government.