It was just a short two or so hours ago that the EURUSd was breaking higher above 1.12256 and running to the 100 hour MA (currently at 1.1255). The price stalled against that MA level (it did the same on Wednesday) and then fell back below the 1.12256 level again. 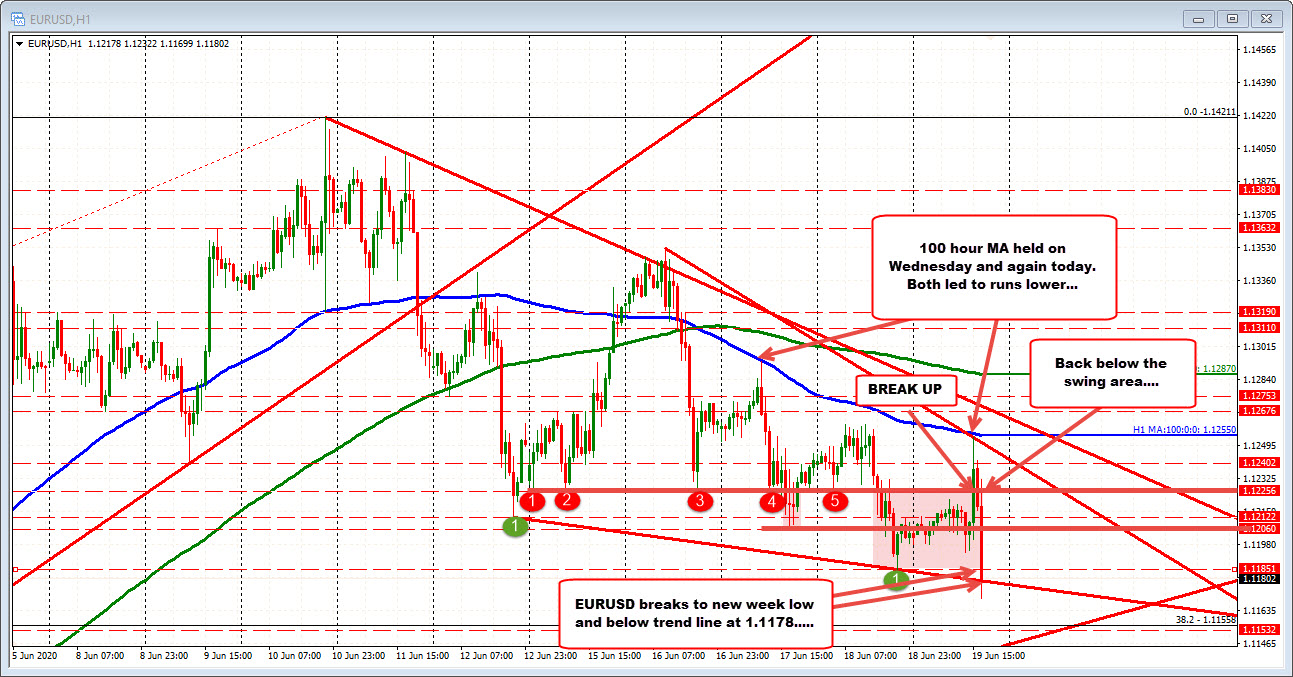 The selling has not let up as the clock ticked toward the London fixing at 11 AM ET/1600 GMT.  That took the price below the low from yesterday at 1.1185 and a lower trend line at 1.1178. The low reached 1.11673 and has since bounced back higher.
It’s Friday. It’s the 4 PM London fixing which can lead to increased volatility and liquidity issues. Nevertheless, the holding of the 100 hour moving average just a few hours ago and the subsequent fall continues to show that the bears are more in control. Resistance at the 1.1200 to 1.1206 area now.
END_OF_DOCUMENT_TOKEN_TO_BE_REPLACED

Demand for higher-yielding American assets growing
Here is the link for more
Check out USD/JPY … its net more or less unchanged, even a little lower, since November last year …. Without all the Japanese money leaving yen into USD it’d have to be lower I guess? 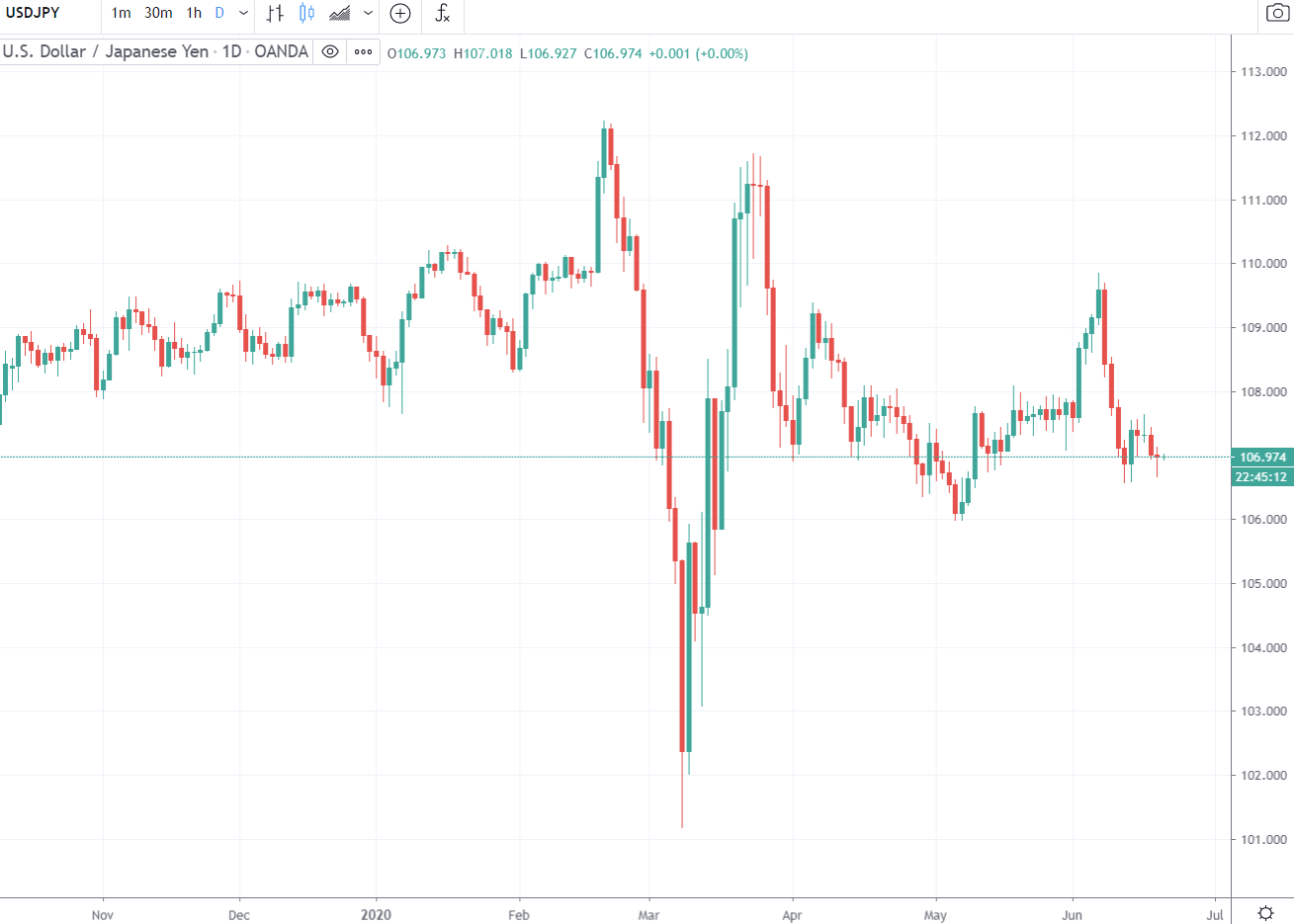 END_OF_DOCUMENT_TOKEN_TO_BE_REPLACED

Risk on the theme

The new week is starting where the last one left off.
S&P 500 futures are up 0.5% to start the week after a massive rally in global equities last week, including +10% in some European equities.
Protests didn’t slow down the market last week and they aren’t having an effect today. In FX, the US dollar and yen are sagging, which is a classic risk-on stance.
So far the moves are modest with the commodity currencies up 15-20 pips. The pound was especially soft late in the day Friday but it’s got some life early, up 27 pips to 1.2695.
END_OF_DOCUMENT_TOKEN_TO_BE_REPLACED

The Bank of England is looking more urgently at options such as negative interest rates and buying riskier assets to prop up the country’s economy as it slides into a deep coronavirus slump, the BoE’s chief economist was quoted as saying.

The Telegraph newspaper said the economist, Andy Haldane, refused to rule out the possibility of taking interest rates below zero and buying lower-quality financial assets under the central bank’s bond-buying programme.

“The economy is weaker than a year ago and we are now at the effective lower bound, so in that sense it’s something we’ll need to look at – are looking at – with somewhat greater immediacy,” he said in an interview. “How could we not be?”

Top BoE officials have previously expressed objections to taking rates below zero – as the central banks of the euro zone and Japan have done – because it might hinder the ability of banks in Britain to lend and hurt rather than help the economy.

But with the BoE’s benchmark at an all-time low of 0.1% and Britain facing potentially its sharpest economic downturn in 300 years, talk of cutting rates to below zero has resurfaced.

Governor Andrew Bailey said on Thursday the BoE was not contemplating negative rates, but he declined to rule it out altogether.

END_OF_DOCUMENT_TOKEN_TO_BE_REPLACED

From the US afternoon, when equities and risk currencies dropped away …. or more accurately, continued to drop away …

US Senator Lindsey Graham, (persistent brown nose to Trump), weighing in yet again to try to cover up from the disastrous US fumbling of the crisis:
Graham proposed a “COVID-19 Accountability Act”
all within 60 days.
It weighed on markets and there is a little more follow through in early Asia.
END_OF_DOCUMENT_TOKEN_TO_BE_REPLACED
For the AUD
END_OF_DOCUMENT_TOKEN_TO_BE_REPLACED

Unpicking/deciphering that – he thinks lower is more likely.
More:
END_OF_DOCUMENT_TOKEN_TO_BE_REPLACED

They see some upside risks as trade risks cool

In a deeper breakdown, they boosted the 2020 US growth forecast while cutting China and Europe. On the whole, this isn’t great news for the global economy but it’s nothing surprising.

END_OF_DOCUMENT_TOKEN_TO_BE_REPLACED

Asian equities slump amid some caution in the risk mood

Japanese stocks are lower as tariffs continue to be a niggling issue in US-China trade talks. We had Trump threaten more tariffs – should talks not go well – in his speech before a WSJ report noted that both sides are still struggling to find common ground on the matter.

Meanwhile, the civil unrest in Hong Kong is continuing to affect the risk mood in the region as well, with the city continuing to descend into total chaos. The Hang Seng is down by 2.2% on the day as it sinks to session lows at the moment.
US futures are also a tad softer and that is keeping risk trades on edge as we begin the session. The franc is among the better performers with USD/CHF approaching 0.9900 though the yen has given up some of its earlier gains with USD/JPY still around 109.00.
END_OF_DOCUMENT_TOKEN_TO_BE_REPLACED