The WHO chief scientists is on the wires saying that:
He adds nevertheless that:
There has been some leakage to the downside in the US stock indices of the last few minutes. The NASDAQ index is currently trading at 9649 after trading is highs 9678.77. The S&P index is trading at 3114.66 vs. a high of 3119.95.
Other Covid 19 news headlines.
UK’s Johnson says:
in Italy, PM Conte is saying:
Italy reports 321 new coronavirus cases vs. 318 on Tuesday. The death toll rose by 71 vs. 55 on Tuesday
New York said that the cases rose by 0.3% vs. the 7 day average of 0.4%.
Finally New Jersey’s governor Murphy is out saying:
END_OF_DOCUMENT_TOKEN_TO_BE_REPLACED

That’s a big build but it was largely foreshadowed by the API report late yesterday. Oil is under some modest pressure and down 37-cents on the day to $32.44.
API numbers from late yesterday:
END_OF_DOCUMENT_TOKEN_TO_BE_REPLACED

Gold falls to the low of the day 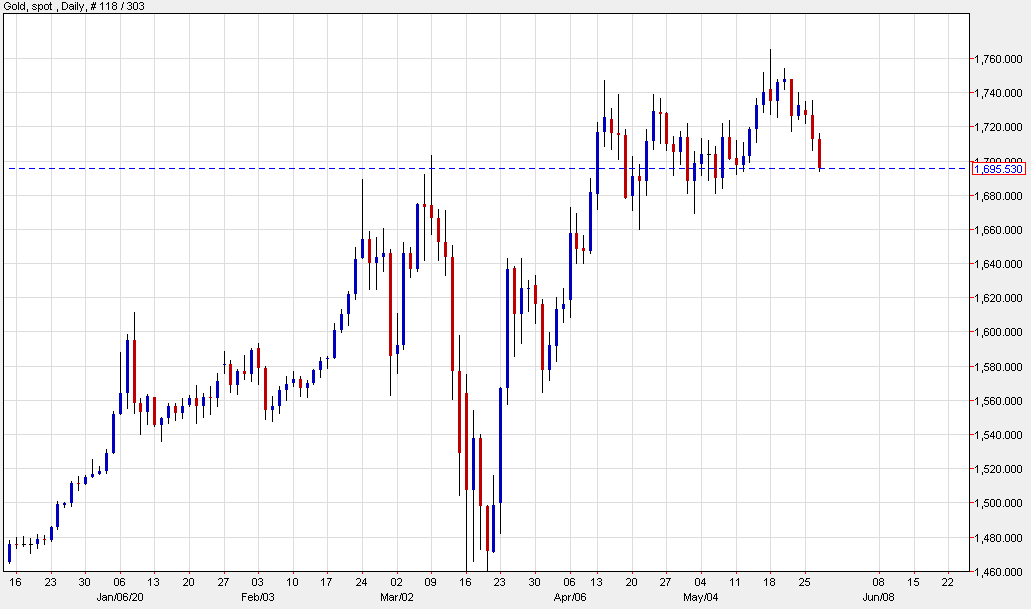 Gold sank through $1700 and continued down to a session low of $1694 in a $16 decline. It’s the third day of selling this week and is being helped along by a strong dollar today.
The drop wipes out the mid-may rally and puts gold back in the middle of the April range.
The better risk tone and big moves in stocks are sparking flows out of gold and into risk assets.
Technically, this looks like a false break or at the very least a retest of the old range.
If central banks are the drivers of this rally, you have to worry about a scenario like the Bank of Israel early this week, where they upgraded growth forecasts and hinted at a time on the sidelines. I can easily see the Fed following the same playbook and that would undermine the short-term case for gold. It’s the same thing on the fiscal side where the better mood will slow the appetite for spending.
END_OF_DOCUMENT_TOKEN_TO_BE_REPLACED

The lockdown has severely hurt the petroleum sector, with oil and gas as well as refining suffering a sharp decline in production.

Gas output in April fell 18.6 per cent to 2.16 billion cubic metres (bcm) against 2.65bcm a year ago, according to the oil ministry.The country’s top gas producer ONGC reported a 15.3 per cent drop in output at 1.72bcm.

“The shortfall in gas production (by ONGC) is primarily due to less gas offtake by consumers,” the ministry said.

State-owned Oil India Ltd also produced 10 per cent less natural gas at 202.05 million cubic metres because of the presence of carbon dioxide at one of its fields in Assam and less purchases by consumers because of the lockdown.

Crude oil production fell 6.35 per cent to 2.5 million tonnes (mt) in April.Production at ONGC was marginally lower at 1.7 mt, while private player Cairn produced 19.2 per cent less at 615,800 tonnes.

ONGC had to shut down some of its wells on the western coast because of lower demand from GAIL and the restriction of movement of its staff.

Refineries produced about 30 per cent less fuel in April at 18.9mt as the lockdown kept most vehicles off the roads.

“Reasons for the shortfall in production mainly include low demand due to Covid-19 lockdown,” the ministry said.

Petroleum product demand is expected to fall eight per cent to 4,597 thousand barrels per day in 2020, the International Energy Agency (IEA) said as part of its May oil market report.

Demand is projected to fall 350 thousand barrels per day in the second quarter of 2020, primarily because of mobility restrictions.

The IEA has projected demand to fall 60 per cent year-on-year in April and May.Diesel demand is projected to contract 690 thousand barrels per day in the second quarter of 2020, while demand for aviation turbine fuel (ATF) and kerosene is projected to fall almost 40 per cent in April-May.

Roughly half of the kerosene produced is used as jet fuel and will be severely impacted by airline restrictions, the IEA said.

The agency expects domestic crude oil production to continue to decline in 2020.

END_OF_DOCUMENT_TOKEN_TO_BE_REPLACED

Antiviral medicine remdesivir is being used to treat cov1 COVID-19 patients at a Chicago hospital,

A small study only, and note: The lack of a control arm in the study could make interpreting the results more challenging, so not leaping to conclusions:
Link here for more
Pic via Wikipedia: 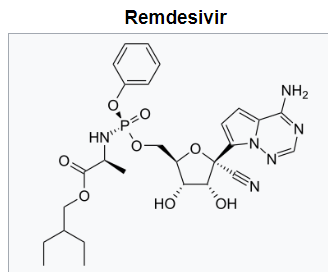 END_OF_DOCUMENT_TOKEN_TO_BE_REPLACED

I noted this already but its worth a separate post.

At this briefing to the press:
Says he is extending the government on dealing with virus outbreak to April 30
These are the social distancing and related guiltiness.
What this means is that Easter is no longer Trump’s target for reopening the US economy:
Says Easter expected to be the peak period of infection.
END_OF_DOCUMENT_TOKEN_TO_BE_REPLACED

The two drugs are arbidol and darunavir

Both of which are said to inhibit the new coronavirus, according to researchers at the Zhejiang University. Lead scientists are recommending the drugs to be used in China’s National Health Commission’s official protocol although the commission warns that so far, there is no confirmed effective treatment still.

Just doing a little digging on the surface here, arbidol isn’t really a common drug outside of Russia and China and is not an FDA-approved treatment for influenza.
As for darunavir, it has been used to treat HIV/AIDS cases alongside other antiretrovirals such as ritonavir – currently on the NHC’s protocol list.
END_OF_DOCUMENT_TOKEN_TO_BE_REPLACED

Indias gold demand was 9 per cent lower in 2019, at 690 tonne, primarily owing to the sharp surge in prices, however, it is expected to rebound in 2020, the World Gold Council (WGC) said on Thursday.

He added that the government has already made hallmarking mandatory on January 15, 2020 with a transition period of one year for the trade to sell or change its existing non hallmarked inventory.

“This is an overdue reform and a positive step towards making the Indian gold more trustworthy. These and other changes to follow are significantly positive for the long-term sustainability of demand, especially for the compliant and the organised,” Somasundaram added.

However, the report said that short-term challenges remain as large sections of the industry compete on low margins and fear tax uncertainty, leaving little incentive for long term investments and modern trade practices.

Globally, WGC said that Gold demand fell 1 per cent in 2019 as a huge rise in investment flows into ETFs and similar products was matched by the price-driven slump in consumer demand.

Besides, the central bank net purchases in 2019 were remarkable the report said. The annual total of 650.3 tonne is the second highest level of annual purchases for 50 years.

In total, 15 central banks increased their gold reserves by at least one tonne in 2019.

END_OF_DOCUMENT_TOKEN_TO_BE_REPLACED

The volatility playbook for the week ahead

After a week where markets have had to try and understand the potential fallout on the Chinese economy from the coronavirus outbreak, a more dovish BoC, a reasonable Aussie jobs report, and solid UK data, we head into the new week with a number of moving parts through which to navigate.
One aspect that I have addressed in the ‘Week Ahead’ playbook is the message I am seeing from the US bond market and it is a play that is progressively suggesting more risk averse positioning. It gives me some belief that implied volatility in markets could start to respond and move higher. I have mentioned in reports of past that the bond market has never fully bought into the reflation trade that so many economists had got quite excited about going into 2020. Where, if I look at the long end of the US Treasury or German bund curve, or even the copper/gold ratio, the market is saying reflation is a pipe dream, and instead, we may actually be too optimistic about the global growth story.

We know the FOMC meeting is this coming week and while no one expects a change in the fed funds rate, we are expecting Jay Powell to be intensely probed about the Fed’s balance sheet and measures to support the repo market. Risk markets, such as equities, have been supported by changes to excess reserves, which despite calls to the contrary from the Fed, the market has taken these changes as QE, and this may well be coming to an end – or, should I say, the expansion of reserve growth will soon abate.