World Bank announce:
More at that link above
END_OF_DOCUMENT_TOKEN_TO_BE_REPLACED

1. Lack of motivation. A talent is irrelevant if a person is not motivated to use it. Motivation may be external (for example, social approval) or internal (satisfaction from a job well-done, for instance). External sources tend to be transient, while internal sources tend to produce more consistent performance.

2. Lack of impulse control. Habitual impulsiveness gets in the way of optimal performance. Some people do not bring their full intellectual resources to bear on a problem but go with the first solution that pops into their heads.

3. Lack of perseverance and perseveration. Some people give up too easily, while others are unable to stop even when the quest will clearly be fruitless.

4. Using the wrong abilities. People may not be using the right abilities for the tasks in which they are engaged.

5. Inability to translate thought into action. Some people seem buried in thought. They have good ideas but rarely seem able to do anything about them.

6. Lack of product orientation. Some people seem more concerned about the process than the result of activity.

7. Inability to complete tasks. For some people nothing ever draws to a close. Perhaps it’s fear of what they would do next or fear of becoming hopelessly enmeshed in detail.

8. Failure to initiate. Still others are unwilling or unable to initiate a project. It may be indecision or fear of commitment. END_OF_DOCUMENT_TOKEN_TO_BE_REPLACED

END_OF_DOCUMENT_TOKEN_TO_BE_REPLACED

Trying to win in the markets without a trading plan is like trying to build a house without blue prints – costly (and avoidable) mistakes are virtually inevitable. A trading plan simply requires a personal trading method with specific money management and trade entry rules.
Discipline was probably most frequent word used by the exceptional trades that I interviewed.There are two reasons why discipline is critical.

A final word, remember that you are never immune to bad trading habits – the best you can do is to keep them latent. As soon as you get lazy or sloppy, they will return ! Coming off a huge debt deal with Argentina, hedge fund billionaire Paul Singer’s advise is to be wary of expert advice. “The important turning points in markets are never identified with precision in advance by ‘experts’ and policymakers. This lack of foresight is not surprising, because markets and the course of the economy are not model-able scientific phenomena but rather are examples of mass human behavior, which are never predictable with anything like precision,” says Singer. “But what is surprising is that even the most sophisticated investors, traders and commentators continue to rely on predictions issued by those who have no record of success at such forecasts.”

END_OF_DOCUMENT_TOKEN_TO_BE_REPLACED

Over the last twenty-five years, there has been a lot of interest in herd behavior in financial markets—that is, a trader’s decision to disregard her private information to follow the behavior of the crowd. A large theoretical literature has identified abstract mechanisms through which herding can arise, even in a world where people are fully rational. Until now, however, the empirical work on herding has been completely disconnected from this theoretical analysis; it simply looked for statistical evidence of trade clustering and, when that evidence was present, interpreted the clustering as herd behavior. However, since decision clustering may be the result of something other than herding—such as the common reaction to public announcements—the existing empirical literature cannot distinguish “spurious” herding from “true” herd behavior.

In this post, we describe a novel approach to measuring herding in financial markets, which we employed in a recently published paper. We develop a theoretical model of herd behavior that, in contrast to the existing theoretical literature, can be brought to the data, and we show how to estimate it using financial markets transaction data. The estimation strategy allows us to distinguish “real” herding from “spurious herding,” or the simple clustering of trading behavior. Our approach allows researchers to gauge the importance of herding in a financial market and to assess the inefficiency in the process of price discovery that herding causes.

The Model
Let’s give an overview of the model that we brought to the data and try to explain why herding would arise. In the model, an asset is traded over many days; at the beginning of each day, an event may occur that changes the fundamental value of the asset. If an event occurs, some traders (informed traders) receive (private) information on the new asset value; although this information may be imprecise, these traders do know that something occurred in the market to alter the value of the asset. The other traders in the market trade for reasons not related to information, such as liquidity or hedging motives. If no event occurs, all traders only trade for non-informational reasons. END_OF_DOCUMENT_TOKEN_TO_BE_REPLACED

END_OF_DOCUMENT_TOKEN_TO_BE_REPLACED

Those of us who don’t learn from mistakes are destined to repeat them. Most traders are busy focusing on trying to understand what moves the market, but an equally beneficial endeavor is understanding what causes you to move. 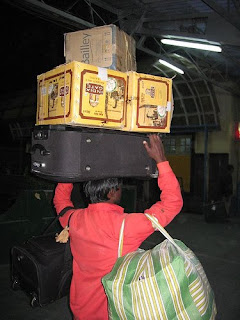 This involves knowing the underlying, often subconscious to a degree,  reasons behind your entries and exit decisions. The inner market. Understanding the connection between your internal state and your behavior is a very effective way to get a handle on repeated mistakes.

Mistakes become emotional baggage when we choose not to learn from them. Not wanting those moments where we can see the truth about our own issues ensures they return again.

END_OF_DOCUMENT_TOKEN_TO_BE_REPLACED

First, is what I call ‘false confidence’ That’s the person who talks big and poses like a big shot. This type of person often takes big risks in an effort to either impress others or to assuage their own discomfort, and the results are often erratic and often end terribly.

Next, there is temporary confidence, which is conditional on recent performance. This is the person whose self-esteem is tied to their account equity or P&L.  When on a good run, they feel confident and take larger risks (often the prelude to giving it all back). And when performance is lousy they start grasping at anything, maybe exiting winners prematurely or taking on excessive risk to get their money back.

Finally, we have true confidence. This is confidence that does not depend on recent results. It is based on a deep sense of inner trust. This is the person who has a history of doing the right thing, regardless of the outcome. Doing the right thing in the sense that they act in their own best interest and trust and understand that doing so over time has a positive impact on results.  The trust runs deep enough to provide resilience in the face of disappointment.  This is true self-confidence, the kind you want in trading and in life.