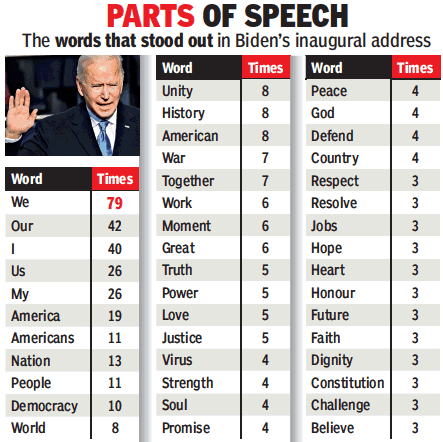 Getting started with the new Biden administration

As expected, Pres. Biden has signed a series of executive orders:

Meanwhile on Capitol Hill,
Having the day off in the NY session to absorb the inauguration ceremonies, I am filled with hope for a more united political environment which hopefully extends to the general public.  Having said that there will be disagreement and those that can’t “let it go”.  Also, with the margins in the House and Senate very close, it will keep the checks and balances in place and hopefully encourage cooperation and compromise from both sides of the aisle.
There is something refreshing about a new beginning.  Let’s hope and pray for the best for all.

Biden sworn in as 46th US President

That must be a surreal moment for a man who dreamed of becoming President for his entire adult life.
For reference, here are all the main market levels on his swearing in:

Trump is expected to issue more than 100 pardons tomorrow, and one may include Julian Assange. However one person who won’t be getting one is Trump himself. The ability of the President to pardon himself is a murky legal concept and he’s not going to go down that round, according to Fox and a separate report from Reuters.
He’s also not going to offer protective pardons for his family, according to the same report.
CNN reported that Dr Salomon Melgen, a prominent eye doctor from Palm Beach who is in prison after being convicted on dozens of counts of health care fraud, is expected to be on the clemency list.
There’s also a disturbing report saying an associate of Rudy Giuliani told a former CIA officer a presidential pardon was “going to cost $2m”

Democratic Senate leader Schumer says that a trial for Trump in the Senate likely won’t occur until after Biden takes over.
Many thought that would be the end of it but evidently not. Schumer said the trial will begin after January 19 and if he’s convicted, there will be a vote to bar him from running again.
That is a very interesting development, that would take Trump out of the 2024 equation. I imagine there might be 17 Republican Senators who want to be done with him. You can be Mitt Romney is one of them.

Italy’s Conte government is at risk

Matteo Renzi’s, leader of the Italia Viva party, says that his party ministers are resigning, putting PM Conte’s government at risk.
Renzi says
The EURUSD moved to a new session low on the news but did find buyers against the lows from yesterday at 1.21364. The low price reached 1.21389 and is trading back at 1.2152 at the moment.

“Bottom line: The outcome of the Georgia run-offs is very significant in two ways: i) by increasing the scope for policy changes, including even more fiscal stimulus and ii) strengthening the MMT (money-financed stimulus) theme in the US and globally,” Citi notes.

The Global Times is the gutter-press tabloid version of state media in China.

Sort of Rupert Murdoch with Chinese characteristics I guess.
They have not pulled punches today:
On the bright side at least the GT is not kicking Australia today.