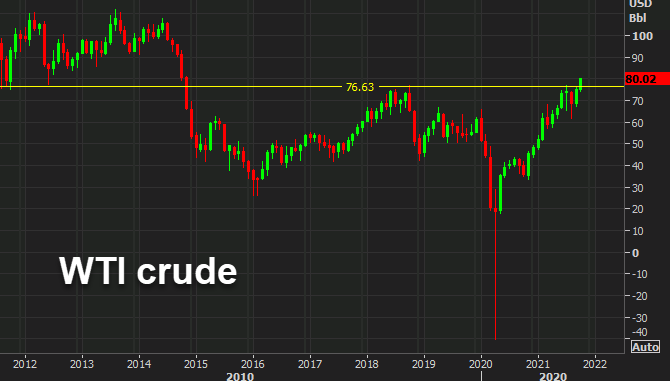 The monthly chart of crude is shown above and I think it clearly illustrates how much room there is to run on this breakout, which came after four months of consolidation. The break also came right after the latest OPEC+ meeting, which offers some fundamental support along with gas-to-oil switching, which is in full swing right now. In fact, we might even see some coal-to-oil switching with inventories in India and elsewhere at unbelievably low levels.
If we get to $100 — and I think it’s more of a matter of ‘when’ than ‘if’ — there are some big knock ons in terms of industrial/consumer costs and inflation. There’s also a political toll and that’s why I think the White House has blinked on Iran sanctions.
OPEC has spare capacity so the chance of a swift move to $100 or above is low but can’t be ruled out. At the end of the day, OPEC wants higher prices and if holding back some supply get them there while making a few enemies then so be it.
Everything I’ve read on oil companies suggest that capital spending isn’t coming back to pre-pandemic levels. Share has discipline now and banks aren’t lending to small drillers. Pipelines are hell to get built and share prices are still extremely depressed so all the excess capital is being funneled to buybacks and debt payments. This has been the perfect storm for awhile and it’s finally coming to pass.