Fed to start tapering by year-end

I didn’t expect Powell to be so explicit about it but he even outlined the timeline for the entire thing, which now the market may likely expect something of an average pace of around $20 billion at each meeting starting from December.
They may likely start slow before gradually stepping things up and looking for a conclusion around the middle of next year.
As things stand, a November announcement is very likely before tapering begins at the December meeting – fitting with expectations coming into yesterday’s meeting.
So, what happens next?
The focus in the market will start to shift towards interpreting how fast does the end of tapering translate to higher rates by the Fed.
Equities are not too concerned but they have been living in their own world for so long that it might take a while to get their head out of the sand. That said, perhaps we’ve already moved past that and the supposed “taper tantrum” isn’t quite as bad as feared.
In other words, the period of easy money has even helped to soothe market fears on this, just like everything else during the pandemic.
The more interesting spots to watch are perhaps the dollar and the bond market.
The mixed dollar reaction yesterday was peculiar (though there has been a lot of head fakes in the reaction to prior FOMC meetings) but I reckon the bulls were certainly hoping to have had some backing from Treasury yields, which did not take flight: 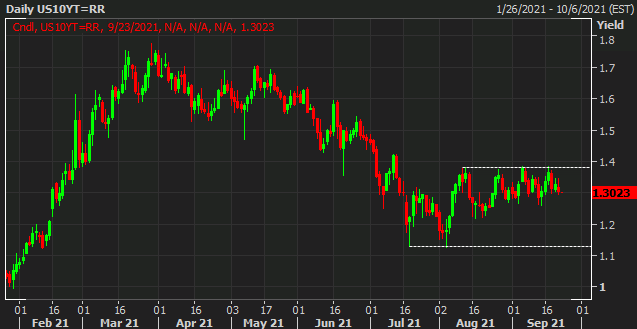 I’d still argue that the greenback should move higher in the bigger picture, on the balance of things, as the Fed is keeping pace with hawkish undertones by other central banks and are well ahead of the “slow bros” i.e. ECB, BOJ, and SNB.
That said, the long-run trend in Treasury yields isn’t too enticing so if the market wakes up to that realisation, then perhaps we are already settling into a spot where yields are meant to be and the dollar may not gather much of a tailwind from this. 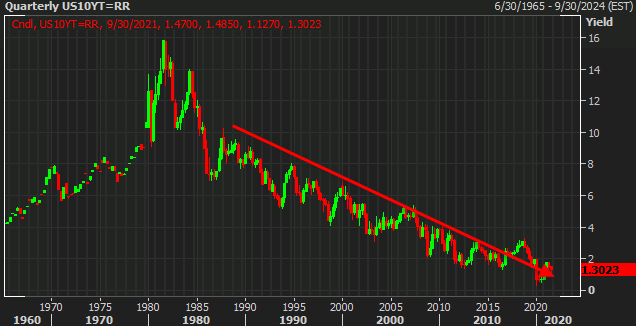 However, a lot may depend on the Fed’s message on rate hikes and how quickly we will see liftoff after the end of tapering, and what the end goal is.
As of yesterday, there is only all but one policymaker at the Fed that does not see a rate hike in 2023 and there are nine that see a move some time next year.
That’s not enough to spur any imminent debate but if the dots start shifting and inflation continues to stay pressured on the higher side come early next year, expect some Fed policymakers to talk up their “flexibility” and “options” in dealing with the latter especially by hiking rates; those remarks may be more commonplace as such.