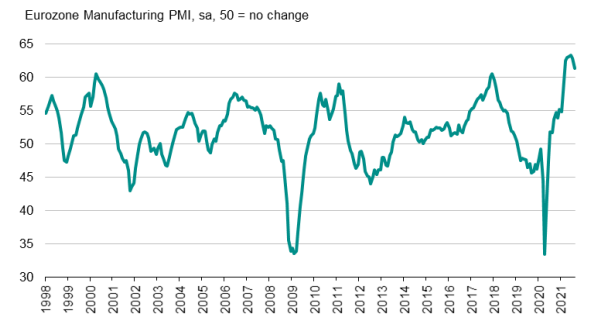 The preliminary report can be found here. Factory activity growth eases to a six-month low but it comes off the back of a very strong run in the past few months, spurred by the latest economic reopening going into the summer.
Output and new orders are seen lower but are still registering modest expansions, keeping overall activity at elevated levels despite major issues posed by supply chain disruptions – likely to be more evident in the months ahead. Markit notes that:

“Eurozone manufacturers reported another month of buoyant production in August, continuing the growth spurt into its fourteenth successive month. The overriding issue was again a lack of components, however, with suppliers either unable to produce enough parts or are facing a lack of shipping capacity to meet logistics demand.

“These supply issues were the primary cause of a shortfall of manufacturing production relative to orders of a magnitude not previously recorded by the survey, surpassing the 24-year record deficit seen in July.

“Factory selling prices consequently rose steeply once again, albeit with some of the upward pressure alleviated by a slight cooling of input cost inflation, albeit with still-high materials prices adding to manufacturers’ problems.

“Employment growth meanwhile eased only modestly from July’s all-time high as producers remained focused on boosting operating capacity. However, a dip in future sentiment in August – linked to the peaking of demand, persistent supply chain issues and the spread of Delta variant – add to signs that both output and employment growth has peaked.”