A deal is a risk for oil

There are positive indications on an Iran nuclear deal, something that could add 2 million barrels per day to global oil supply.
A fourth round of negotiations began today in Vienna and both sides sound optimistic.
Here’s what a senior State Dept official said in a media briefing yesterday:

Let me just start by saying that there’s been a lot of reporting about whether this is the final round, whether this is the decisive one, whether a deal needs to be reached in the coming weeks.  And I would simply say that we feel that the last three rounds have helped to crystallize the choices that need to be made to – by Iran and by the United States in order to come back into a compliance-for-compliance return – well, returning to mutual compliance with the JCPOA. We think that those – that it’s a pretty clear set of choices that needs to be made, because we’re not inventing something new.  It is written in the JCPOA.  And if Iran makes the political decision that it genuinely wants to return to the JCPOA as the JCPOA was negotiated, then it could be done relatively quickly and implementation could be relatively swift.

It seems to me that the old nuclear agreement is on the table. Iran took that deal before and so I don’t know why they wouldn’t take it again.
The official said that from the US side, there is no hesitation:

If we’re realistic about it, and the United States is, the United States understands what it needs to do to come back into compliance with the sanctions relief commitment that it made under the JCPOA, we understand what it will take.  We also understand what Iran needs to do in order to come back into compliance with its nuclear obligations. And again, it’s not something one needs to invent.  One just needs to read the plain text of the JCPOA.  So again, we’re committed to doing it, and it will be – we’ll have to see in the coming days and weeks whether Iran is.

I hate to make predictions about politics, but this sounds like a done deal. To be sure, the official also talked a lot about Iran wanting more sanctions relief than the old deal required, so there’s some tension there but at the core of any deal is allowing Iran to export oil.

So what will it mean for oil?

The first questions is how much crude is really missing from the market. Officially, Iran is pumping 2 or 2.5 mbpd less than previously but there are many who believe that they’ve already restored at least 1 mbpd of that, which has been shipping to China.
Then there’s a question of how much they can restore and how quickly. That’s not at all clear but they’ve likely been preparing for a deal, so I suspect it’s a high number.
Third is the uncertainty about what’s expected. There’s no consensus around a deal and there’s far more oil talk in the market about demand so I don’t think it’s priced in. That worries me and with the oil market being what it is, there’s a risk of a 10% drop on deal headlines.
Looking at the oil chart, there’s some resistance at the March highs and I worry that this deal will make that impossible to break until there is more progress on a vaccine. 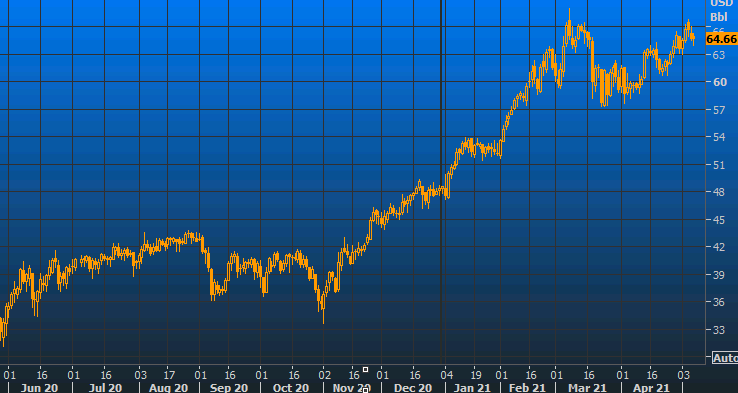 Don’t be surprised if there is a breakthrough this weekend.