Mixed results for the week

The major European indices are ending the session lower. For the week, the results are mixed:

For the week, the provisional closes are showing:
END_OF_DOCUMENT_TOKEN_TO_BE_REPLACED

IMF Gopinath speaks to US inflation

IMF Gopinath speak to US inflation saying:
That is the $24,000 question that will have to play out over time.  The Fed is bullish on the economy and rebound, but the grand experiment is to let the transitory impact from year ago inflation effects, the recent move higher in commodities, the fiscal stimulus and the reopening to play out and then see where inflation lands.
The bond market will have a say in the storyline for the markets.  The 10 year is currently down marginally at an .7068%,. The high yield reached 1.7477% earlier
END_OF_DOCUMENT_TOKEN_TO_BE_REPLACED

Industrial production and Capacity Utilization lead to the sharp fall

The NY Fed’s Nowcast model for 1Q GDP growth fell sharply to 6.3% from 8.6% last week.
The biggest negative contributors to the sharp fall this week were from industrial production (-0.89%) and capacity utilization (-0.86%).  Retail sales also led to a -0.58% decline in the models GDP growth estimate.
The biggest positive contributor came from data revisions (+0.27%).  The Philadelphia Fed manufacturing business Outlook added 0.04%. 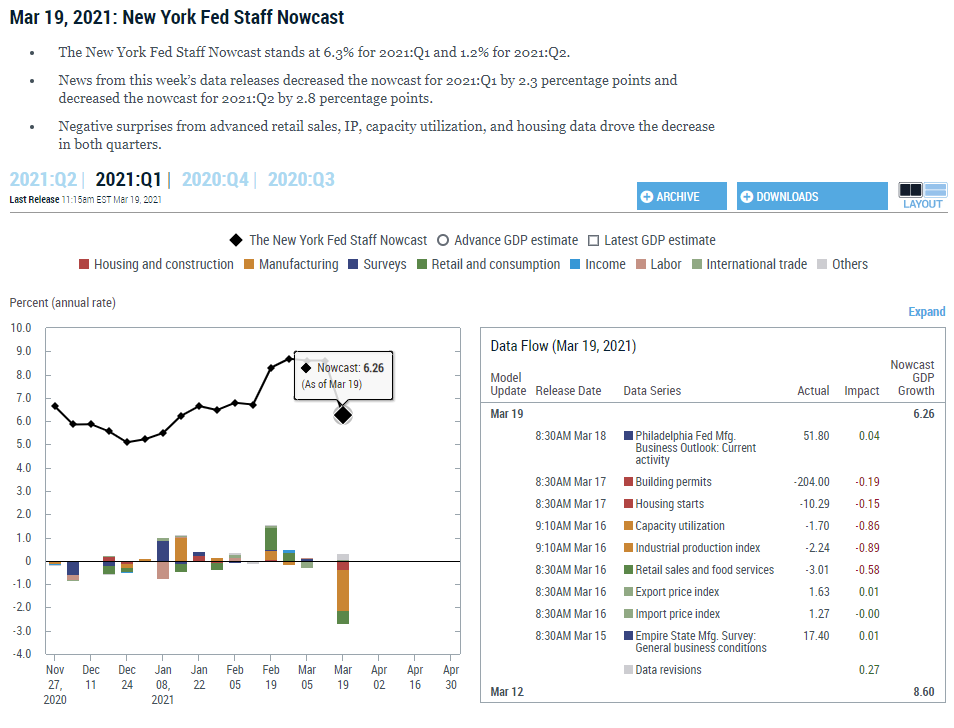 The fall in the NY Fed model, brings the estimate more in line with the Atlanta Fed model which pegs 1Q growth at 5.7%.  They will announce a new estimate on March 24.

The Feds central tendencies for GDP in 2021 are looking for growth to come in between 5.8% 6.6%.
END_OF_DOCUMENT_TOKEN_TO_BE_REPLACED

Standard economics assumes that we are rational—that we know all the pertinent information about out decisions, that we can calculate the value of the different options we face, that we are cognitively unhindered in weighing the ramifications of each potential choice. We are presumed to be making logical and sensible decisions. If we make a mistake, the supposition is that we will learn from those mistakes and behave differently in the future.

However, we are far less rational in our decision making than standard economic theory assumes. Our irrational behaviors are neither random nor senseless—they are systematic and predictable. We make the same types of mistakes repeatedly because of how our brains are wired. Behavioral economists believe that people are susceptible to irrelevant influences from their immediate environment, irrelevant emotions, shortsightedness, and other forms of irrationality.

What good news can accompany this realization? The good news is that these mistakes also provide opportunities for improvement. If we all make systematic mistakes in our decisions, then why not develop new strategies, tools, and methods to help us make better decisions and improve our overall well-being? [Behavioral economists believe] that there are tools, methods, and policies that can help all of us make better decisions and as a consequence achieve what we desire.

When it comes to the markets and our quest to understand them, we would all benefit from first learning about ourselves.  Then, and only then, may we have a fighting chance to “trade another day”.

END_OF_DOCUMENT_TOKEN_TO_BE_REPLACED

Powell publishes essay in the WSJ

The US dollar is near the best levels of the day after the Fed announce that it would end an exemption that allowed banks not to have to post capital buffers against Treasury holdings. The result of Treasury liquidation but much of it was likely frontrun.
In the aftermath US 10-year yields are up 2.7 bps to 1.73%.
The US dollar is being dragged higher along with the move. As a result, EUR/USD is down 36 pips to a session low of 1.1879. Cable is also challenging the pre-FOMC low of 1.3851, down nearly 80 pips on the day and a full cent from the highs a few hours ago:

The news schedule is very light today so moves from here will be all about the interactions between stocks, bonds and FX.
END_OF_DOCUMENT_TOKEN_TO_BE_REPLACED

10-year JGB yields are little changed on the day after a bit of a spike on the BOJ policy decision earlier, in which the central bank said it will widen the yields band to +/- 0.25%.
It is also the first time that the central bank made mention to the yields band in its policy statement, so this is now a rather official piece of policy setting in some ways.
That said, 10-year JGB yields are keeping a little higher relative to the start of the week, though not by much. In some sense, the leaked story on this since a week ago may have already given the market plenty of time to prepare itself.
But also, the jump in yields this week owes in some part to the surge in Treasury yields yesterday as well – causing a spillover impact to other bond markets.

In the bigger picture, yields look to be settling into a bit of a range above 0% and the BOJ widening the band to 0.25% is but an acknowledgment of that.
While that could be seen as yen supportive, the fact that the BOJ is still keeping a rather tight lid on yields and their reiteration that YCC is still much needed, means that any major shift in policy thinking may not be as major as one would think.
For the BOJ, sure this can arguably be considered as a massive fine-tuning since they aren’t typically known to even explore any hawkish possibilities.
But when the central bank itself also owns two-thirds of JGBs in the market, it may not be quite as big a change as played out to be perhaps.
END_OF_DOCUMENT_TOKEN_TO_BE_REPLACED

Was the BOJ more dovish or hawkish today? That’s a question that yen traders may not necessarily get the answer to in the immediate aftermath.

There were a couple of key takeaways from the policy decision, so let’s explore:
The first two points are arguably leaning more towards the hawkish side, though of the key takeaways above have already been communicated in the run up to the meeting via media leaks and reports over the past week or so.
However, the BOJ still judges that large scale ETF purchases are still effective in keeping the market more stable during times of “heightened instability”.
Meanwhile, this is also the first time that the BOJ has officially put the 10-year JGB yields band into its policy statement – before this it was just a verbal commitment.
The other remaining points lean more towards the dovish side, with the new interest scheme largely to try and convince the market that the BOJ does have room to cut rates further; after having been questioned persistently on the side effects of doing so.
As such, there is a mixture of elements in there for yen traders to work with. But ultimately, I reckon it’ll come down to how the JGB market may look to test the BOJ’s commitment of the 0.25% band above the 0% target.
Going back to the USD/JPY chart, traders look like they are still trying to make up their mind with Treasury yields also a key factor to watch out for.
Topside is limited around short-term resistance near 109.26-36 with the 200-week moving average @ 109.00 one to be mindful of ahead before the close today.
But overall price action continues to trade in and around the key hourly moving averages @ 108.90 and 109.07 respectively, with near-term support seen closer to 108.77 and also from yesterday’s low @ 108.63.
Those will be the key levels to watch in order to gauge how buyers or sellers are going to attempt to extend their bias in the pair ahead of the weekend.
Not forgetting that there is a decent-sized expiry ($840m) rolling off today at 109.00 as well. And just bear in mind that we are also approaching the fiscal year-end in Japan, though repatriation flows should arguably have been mostly done in the weeks prior.
END_OF_DOCUMENT_TOKEN_TO_BE_REPLACED

Both the ETF and JBG band decisions were widely expected.
The two main planks of the pilcy decision were flagged for weeks in advance and the Nikkei highlighted the two measures as likely only yesterday. Thus the decisions come as little surprise.
As I post yen is not a lot changed after a minor wobble 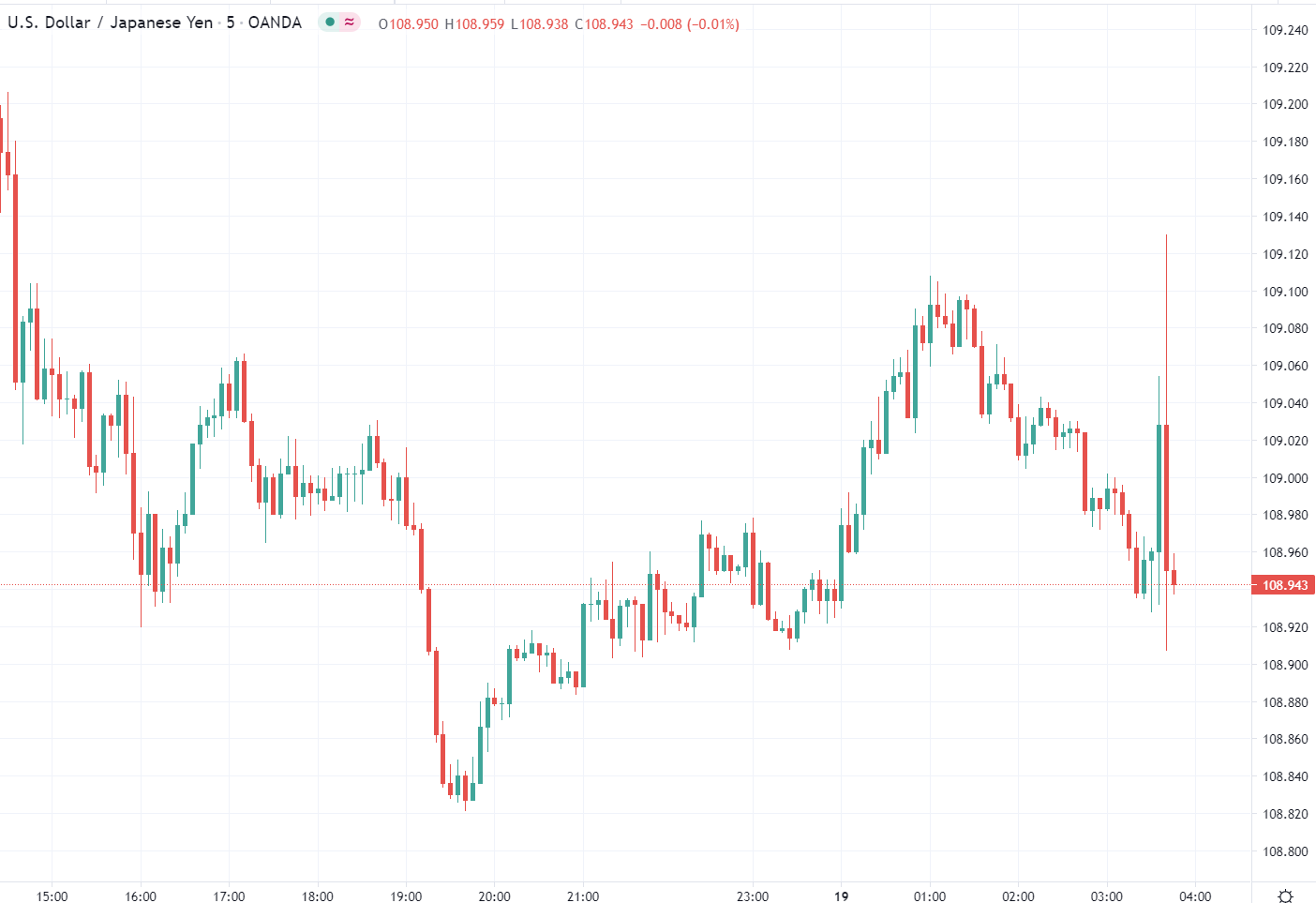 END_OF_DOCUMENT_TOKEN_TO_BE_REPLACED
There is no time scheduled for the announcement, after 0230GMT is a good bet. The Bank will be keen to ensure what it changes is not perceived as a reduction in policy support, Bank of Japan Governor Kuroda will likely emphasise this, and also that the Bank stands ready to do more if needed, at his news conference that will follow at 0630 GMT. 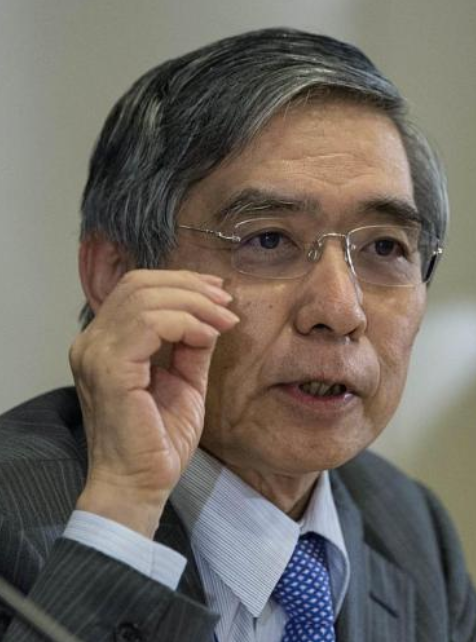