The 14th Meeting of OPEC and non-OPEC Ministers took place via video conference on Thursday March 4, 2021, under the Chairmanship of HRH Prince Abdul Aziz bin Salman, Saudi Arabia’s Minister of Energy, and Co-Chair HE Alexander Novak, Deputy Prime Minister of the Russian Federation.

The Meeting welcomed the appointment of HE Mohammed Al-Fares, Minister of Petroleum of Kuwait and the return of HE Mohamed Arkab, Energy Minister of Algeria.

The Meeting emphasized the ongoing positive contributions of the Declaration of Cooperation (DoC) in supporting a rebalancing of the global oil market in line with the historic decisions taken at the 10th (Extraordinary) OPEC and non-OPEC Ministerial Meeting on 12 April 2020 to adjust downwards overall crude oil production and subsequent decisions.

The Ministers noted, with gratitude, the significant voluntary extra supply reduction made by Saudi Arabia, which took effect on 1 February for two months, which supported the stability of the market.

The Ministers also commended Saudi Arabia for the extension of the additional voluntary adjustments of 1 mb/d for the month of April 2021, exemplifying its leadership, and demonstrating its flexible and pre-emptive approach.

The Ministers approved a continuation of the production levels of March for the month of April, with the exception of Russia and Kazakhstan, which will be allowed to increase production by 130 and 20 thousand barrels per day respectively, due to continued seasonal consumption patterns.

The Meeting reviewed the monthly report prepared by the Joint Technical Committee (JTC), including the crude oil production data for the month of February.

The Meeting noted that since the April 2020 meeting, OPEC and non-OPEC countries had withheld 2.3bn barrels of oil by end of January 2021, accelerating the oil market rebalancing.

The Meeting Extended special thanks to Nigeria for achieving full conformity in January 2021, and compensating its entire overproduced volumes.

The ministers thanked HE Timipre Sylva, Minister of State for Petroleum Resources of Nigeria, for his shuttle diplomacy as Special Envoy of the JMMC to Congo, Equatorial Guinea, Gabon and South Sudan to discuss matters pertaining to conformity levels with the voluntary production adjustments and compensation of over-produced volumes.

In this regards the Ministers agreed to the request by several countries, which have not yet completed their compensation, for an extension of the compensation period until end of July 2021.

It urged all participants to achieve full conformity and make up for pervious compensation shortfalls, to reach the objective of market rebalancing and avoid undue delay in the process.

The Meeting observed that in December, stocks in OECD countries had fallen for the fifth consecutive month.

The Meeting recognized the recent improvement in the market sentiment by the acceptance and the rollout of vaccine programs and additional stimulus packages in key economies, but cautioned all participating countries to remain vigilant and flexible given the uncertain market conditions, and to remain on the course which had been voluntarily decided and which had hitherto reaped rewards.

The Ministers thanked the JTC and the OPEC Secretariat for their contributions to the meeting. The next meetings of the JMMC and OPEC and non-OPEC Ministers are scheduled for 31 March and 1 April 2021, respectively.

The Saudi energy minister is on the wires saying:
END_OF_DOCUMENT_TOKEN_TO_BE_REPLACED

Russia and Kazakhstan will be allowed to modestly increase oil output in April, according to a report. Further reports also say that existing quotas will be rolled over.
One report says Saudis will keep their voluntary 1mbpd cut through April. That was not the baseline at all but it’s still murky.
Assuming this really is a small increase and everything comes to fruition, it will be all about the voluntary cut from here.
Update: A report says Saudi Arabia will gradually start bringing back its voluntary cut in May. How gradually is obviously the question, but the baseline heading into this meeting was that they would bring it all back in April, so this is undoubtedly bullish.
Update 2: OPEC will meet again on April 7 to decide what to do for May. There had been some talk of a two-month rollover so this adds a bit of uncertainty. I highlighted earlier that it’s a good idea for OPEC to keep other producers guessing because if they commit for longer timeframes, it might incentivize other producers to invest in new production. The ever-looming threat that OPEC could come in with the production hammer will keep them cautious.
END_OF_DOCUMENT_TOKEN_TO_BE_REPLACED

The major European shares are closing the day with mixed results.  The provisional closes are showing:

in the European debt market, the benchmark 10 year yields are lower with the UK 10 year down -4.5 basis points.

A snapshot of the US stock market as traders prepare for Fed chair Powell speaking at the top of the hour:
In the US debt market, yields are marginally lower, with the 30 year bond yield is down -2.1 basis points:

In the forex market, the CAD has moved to the strongest of the majors. The CHF remains the weakest followed closely by the JPY. The USD remains mixed but has shifted a little more to the weaker bias. Nevertheless it remains higher vs. a CHF, JPY and EUR, and lower worsening CAD, AUD, NZD and GBP.
END_OF_DOCUMENT_TOKEN_TO_BE_REPLACED

END_OF_DOCUMENT_TOKEN_TO_BE_REPLACED 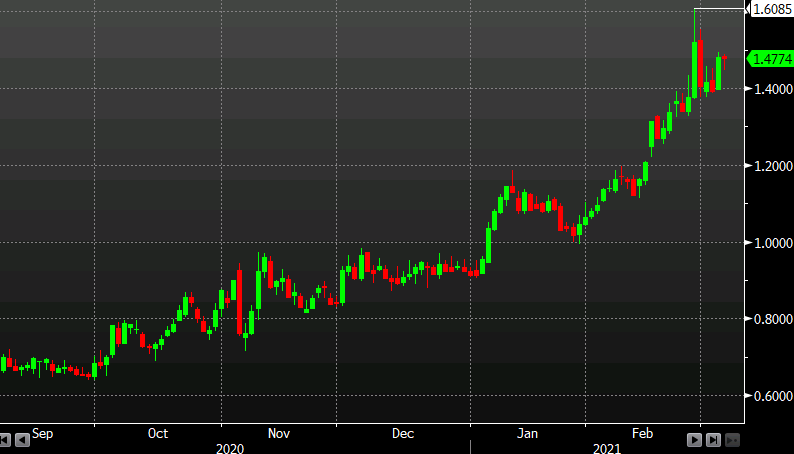 Treasury yields had pushed lower earlier in the day on risk aversion and speculation about Powell offer (at the very least) a dovish hint.
The peak of the move was US 10s falling 4 bps to 1.44%. They’ve since risen back to unchanged on the day at 1.48% with most of that coming in the past hour.
Given Evans’ comments yesterday and other Fed commentary in the past week, the main risk is that Powell says nothing and highlights the move higher in rates as driven by economic optimism. If that’s the case, then we could see yields begin a climb back to 1.60%.
END_OF_DOCUMENT_TOKEN_TO_BE_REPLACED

Comments at the open of the OPEC+ meeting 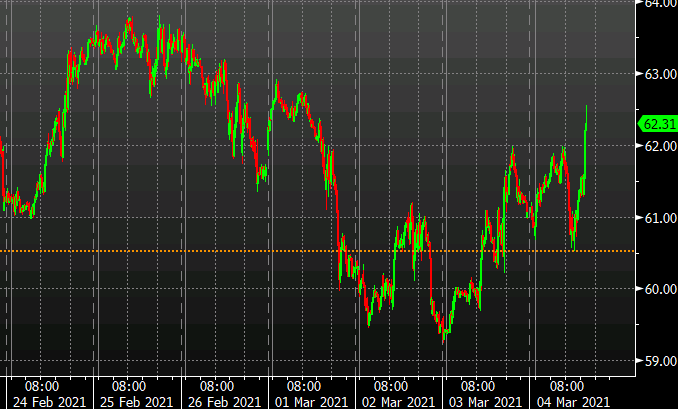 Comments in the public part. They’ll soon head into private deliberations
Russia’s Novak:
WTI crude is at the highs of the day, up $1.20 to $62.47. The market is reading the signals about ‘caution’ and keeping powder dry as a sign that OPEC won’t flood the market.
There’s still so much uncertainty about today’s meeting but this strong market response so far indicates to me how much money is on the sidelines and waiting to pile into oil.
Update: Oil journalist Reza Zandi writes: “An informed source just said that some in the OPEC+ are concerned that Russia might ask for an increase bigger than 500 thousand bpd for April 1st, and to that end pressure others. Novak too emphasized the good conditions in the market.
END_OF_DOCUMENT_TOKEN_TO_BE_REPLACED 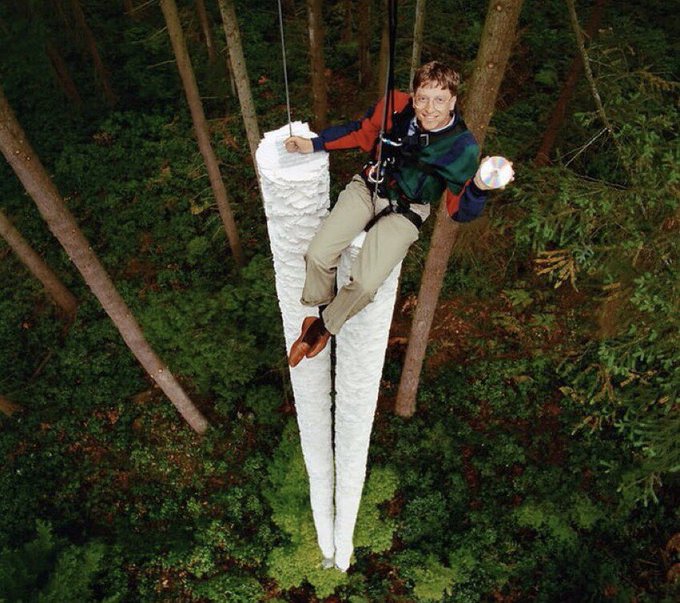 END_OF_DOCUMENT_TOKEN_TO_BE_REPLACED

Risk sentiment is keeping on the defensive going into European trading but there’s an air of calm in the bond market and the market focus may shift towards that, or at least the capitulation in equities may hit the pause button for now.

The bond market is eyeing Fed chair Powell’s speech later today and with the possibility of a pushback, the rise in yields this week is at least stalling for the time being.
Over to equities, we are also seeing US futures pare losses further with both S&P 500 futures and Nasdaq futures being down by just 0.2% currently.

END_OF_DOCUMENT_TOKEN_TO_BE_REPLACED

It may be a meltdown in Asian equities but the mood going into Europe may see the focus shift towards the calmer tones in Treasuries so far today. After the spike higher yesterday, 10-year yields are settling down 1 bps @ 1.47% for the time being.
The bond market may be tentative ahead of Fed chair Powell’s speech but such relative calm may also help keep equities and risk sentiment from capitulating altogether.
While stocks are still on the defensive, we are seeing a modest bounce in major currencies with the aussie, kiwi and loonie up to session highs for the day as the dollar gives up some ground from the start of trading today.
AUD/USD is back above 0.7800 as price action sits in between its key hourly moving averages @ 0.7776-46 at the moment. As such, the near-term bias is more neutral.
Elsewhere, USD/CAD is trading back just under its 100-hour moving average @ 1.2645 with oil prices keeping buoyed at around $61.65 ahead of the OPEC+ decision today.
END_OF_DOCUMENT_TOKEN_TO_BE_REPLACED

The Nikkei falls to near one-month lows

A rough day for Asian equities as the decline in US stocks yesterday, as well as US futures today, is keeping risk sentiment in a rough spot at the moment.

Of note, the Nikkei also closes below a key trendline support and that might see sellers keep the momentum. But a lot will ride on Fed chair Powell’s speech later today.
Elsewhere, the Hang Seng is down 2.4% and the Shanghai Composite down 2.1%. Meanwhile, S&P 500 futures are down 0.5% and Nasdaq futures down 0.8%.
END_OF_DOCUMENT_TOKEN_TO_BE_REPLACED