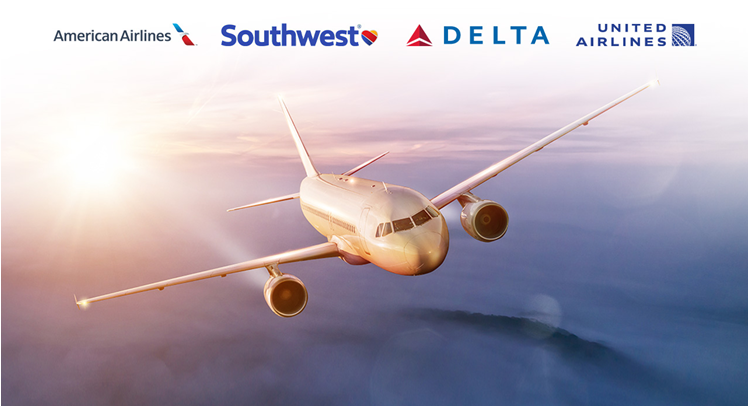 A month has hardly passed since the publication of my article about airlines, and the market is already full of rumors about one of the largest airlines approaching bankruptcy. In that post, I tried to give the soft version of the situation; moreover, it was my individual opinion which could be a mistake. However, time shows that things are worse than I expected.

Today, I will reveal other aspects of risks in the sector of air transportation and give hints on how to make money on airlines stocks; also, we already have the information about the income of airlines in the first quarter.

As I wrote earlier, 10 airlines asked the US government for financial help, thus increasing the debt load. As long as the flow of passengers has dried out, the debts will be extremely hard to pay off. Apart from the debt, the company also needs maintenance, which includes expenses on salaries, the maintenance of airplanes, etc.

Before airlines got in trouble, clients used to buy tickets several months before the flight with a good discount. One side spent less on their trips while the other could plan flights more efficiently.

What has changed these days?

Rumors started creeping in the market about the upcoming bankruptcy of one of the largest airlines. The first person who mentioned this is officially considered to be the director-general of Boeing (NYSE: BA) David L. Calhoun. However, he never mentioned the exact name of the company that may face it. Nonetheless, his statement alone made many investors doubt whether it is wise to invest in stocks nowadays and many passengers – whether they should buy their tickets beforehand.

Income from early booking under threat

These days, it has already become very tiresome to seek a refund for your ticket. Only two small companies – Allegiant Air (NASDAQ: ALGT) and Spirit Airlines Inc. (NYSE: SAVE) – keep returning money to their passengers if they refuse to fly, however, even some of their clients have complained that they failed to get their money back.

Large airlines generally tend not to give the money back – only in case the flight has been canceled by the airline itself. Otherwise, the client gets a voucher for the sum of the ticket that they may use until a certain date. It is quite easy to draw a conclusion from the current situation. In the case of a company’s bankruptcy, the clients will not get their money back; hence, the number of pre-booked tickets will keep decreasing, and clients will most likely go to smaller airlines.

Of course, some might say that it is safer to fly with large airlines. Normally, this is true. They have newer airplanes, technical maintenance is more modern, however, if they cut down on the expenses, this may touch upon their airplanes as well. Small airlines have more chance to find financing, especially if they get the clients of their larger rivals.

It turns out that the situation is getting worse or large airlines. There must be something behind the fact that Warren Buffett sold the stocks of all the 4 companies he had bought – with a loss for the fund – regardless of being a long-term investor. Such investors normally enlarge their portfolios but never sell if stocks fall. The only exception is a company being on the verge of bankruptcy.

We will analyze the 4 largest air carriers that control 80% of the US market, starting with the smallest one – Southwest Airlines (NYSE: LUV).

Southwest Airlines finished the first quarter with a loss of 9 million USD – while in the preceding quarter it made a profit of 513 million USD. Its debts have grown to 17.81 billion USD, and its assets amount to 26 billion USD.

It turns out that the company’s debt has reached 65% of its assets. The situation is not critical, so the bankruptcy of Southwest Airlines is unlikely.

United Airlines Holdings, Inc. (NASDAQ: UAL) finished the first quarter of 2020 with a net loss of 1.7 billion USD, while in the previous quarter its profit reached 641 million USD.

Its debts grew to record 43.63 billion USD. Last time they were so huge after September 11th – the company then went bankrupt and merged with Continental Airlines.

Regardless of the decision of Delta Air Lines (NYSE: DAL) to use passenger airplanes for cargo transportation, the company failed to remain profitable in the first quarter of 2020.

The most losing company turned out to be American Airlines Group (NASDAQ: AAL). It finished the first quarter with a loss of 2.24 billion USD, while in the previous quarter its profit amounted to 414 million USD. The company’s current debt is 61 billion USD, which are, happily, not the highest values. However, the worst thing is that the debt has already exceeded the assets of the company which amount to 58 billion USD.

Hence, American Airlines is the first candidate for bankruptcy.

What do traders think?

As you see, no company has managed to remain profitable in the current situation, which is not surprising. There is evidence that the flow of passengers has decreased by 97%. Clearly, air carriers cannot generate profit.

Anyway, let us have a look at what traders think and which stocks they are selling, counting on the company’s bankruptcy. For this, we need to have a look at the Short Float value; I will show you the data on the diagram. 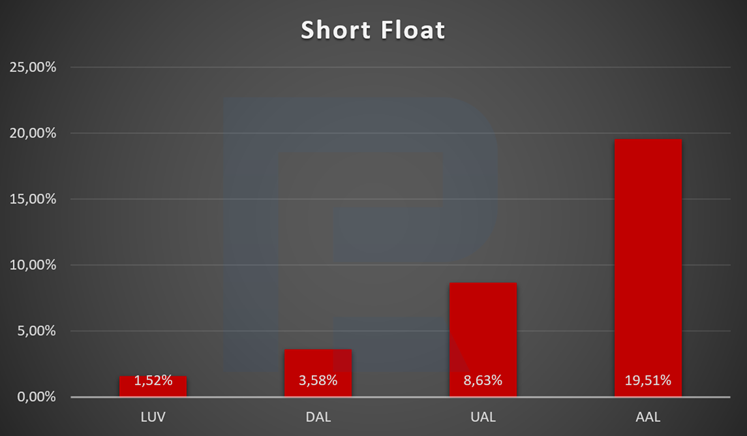 From the diagram, we may conclude that they have put their stake on American Airlines. Traders are in short positions on more than 19% of its stocks.

Now, it is time for the technical analysis of the companies.

On the chart, there is a Triangle and its lower border is already broken, which means that the price will start declining. After September 11th, the stocks declined below 10.00 USD. The crisis of 2009 drew the price to 4.50 USD. As long as the terror act of September 11th affected specifically airlines, we will consider 10.00 the aim of the decrease. 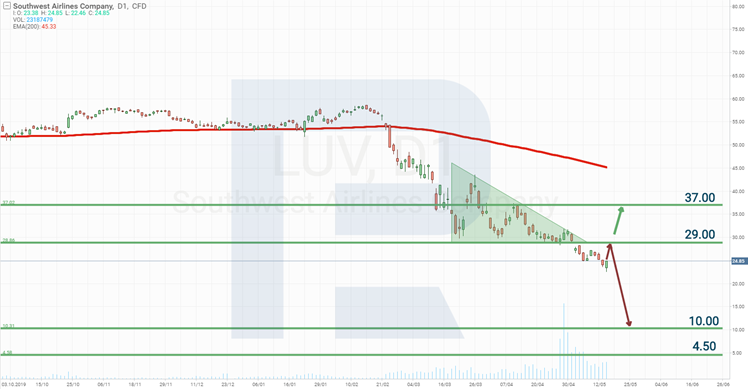 However, we must account for the financial results of the company. Out of the four air carriers mentioned above, this one is the smallest, and its financial results are much better than those of the others. Hence, if the level of 29.00 USD is broken away, this may even signal growth. The company may also merge with another one. Thus, it is too risky to put your stakes on the decline here.

The situation with the stocks of United Airlines is identical. The price of the stocks has already broken the lower border of a Triangle. This airline failed to survive in 2001, so we will take the level of 2008 as a landmark – after that crisis, the stocks fell to 2.70 USD. 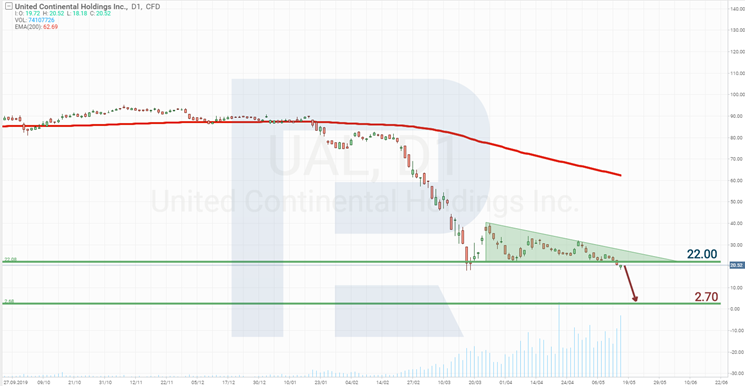 The chart of Delta Air Lines stocks does not differ a lot from the charts of other airlines. There is also a Triangle with the lower border broken, which signals a further decline of the price. After September 11th, the company did not escape bankruptcy, its stocks cost nothing, and it reappeared in the exchange in 2007. 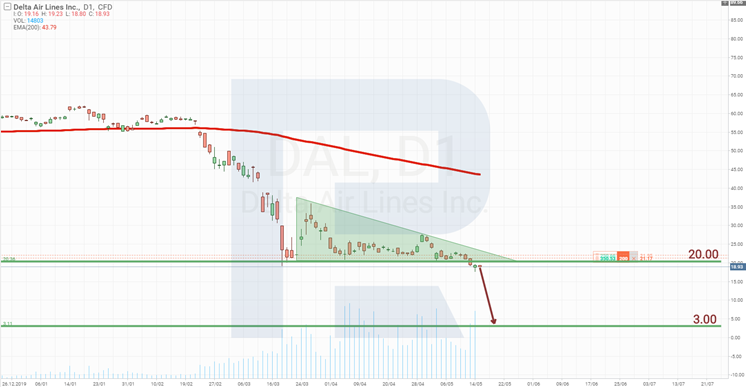 After the crisis of 2008, the stock price fell to 3 USD. So, in the current situation, the worst level will be 3 USD.

Out of the 4 companies, the stocks of American Airlines Group are the cheapest. This is no surprise as it has the largest debt and losses. The company had hard times after September 11th and failed to survive in 2008, going bankrupt and merging with US Airways. The previous stocks of the company went invalid while the new ones started trading at NASDAQ under the ticker AAL. 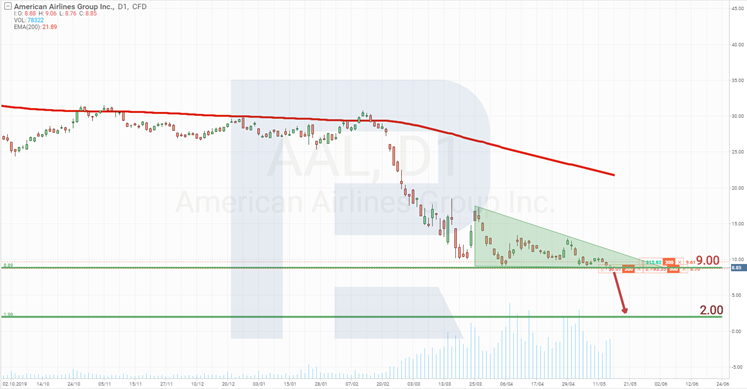 The chart of the stocks allows having a look at the prices before the bankruptcy and thus find the possible low to which the stock may decline. This is the level of 2 USD per stock.

In our case, the prices are low due to the financial state of the companies deteriorating. Risks are huge. Out of the 4 airlines, only Southwest Airlines managed to live through the crises of 2001 and 2008 without going bankrupt, and even now it looks stronger than its rivals. So, if you do think about investing in an air carries, choose this company. However, keep in mind that as soon as one company announces bankruptcy, investors will be scared and start selling the stocks of other companies, which will draw the prices deeper down.

This is the moment when the stocks may become underpriced; however, I will say it once again – the risk is extremely high. The simplest decision will be speculation on stocks: open short position for several days, then lock in profit.

American Airlines Group looks the weakest company among the rivals, so it is highly probable that the stock price will go on falling and the company goes bankrupt. So, you may count on this events and trade accordingly. This is going to be an optimal decision – or choose another sector for investments.