Or do you simply shoot from the hip and call it artistry or intuition? Does this work for you?

Do you follow your rules rigidly without flexibility or discretion? Does this serve you over time?

Do you abandon your rules in the heat of trading, only to regret it? Do you stubbornly go against your rules thinking this time you know better? What would happen if you didn’t do this? END_OF_DOCUMENT_TOKEN_TO_BE_REPLACED

END_OF_DOCUMENT_TOKEN_TO_BE_REPLACED & U are Wasting Your Time ,Money ,Energy too.

Untill & Unless U are having Solid Strategy to Trade ….Don’t Trade @ all.

END_OF_DOCUMENT_TOKEN_TO_BE_REPLACED

1. Know what you want. Know who you are, not who you think you should be. Self-awareness gives you the power to pursue what really feeds your soul and the belief that you deserve it.
2. Know the cost of getting what you want. Realize the trade-offs of every choice. People often think if they are clever they can make choices without experiencing any downside. Any road you choose means there is a road you won’t experience.
3. Be willing to pay the cost. People often try to negotiate to win a choice without cost. Every choice involves a price; we get to decide what cost we want to pay.

END_OF_DOCUMENT_TOKEN_TO_BE_REPLACED END_OF_DOCUMENT_TOKEN_TO_BE_REPLACED

If you invest in the stock market you’re almost 100% certain to have heard of Warren Buffett. Indeed, you’ve probably read books about him, or you might have read his annual shareholder letter, or even been to the spectacle that is the Berkshire Hathaway annual shareholders meeting.

Now’s your chance to watch an interesting documentary that offers an intimate look at the life of Warren Buffett. The documentary offers an eye opening view of how he runs the company (complete with a tour of his office), the annual shareholders meeting of Berkshire Hathaway, and a peak at his many eccentricities.

Of course the film also reviews how he made his money, how he operates, how he came to operate in the way he does, and how he thinks about his wealth which is in the tens of billions of dollars.

END_OF_DOCUMENT_TOKEN_TO_BE_REPLACED

The question of whether someone really should not be a trader is one that’s not often brought up in discussions between market participants. It’s almost as if the baseline assumption is that the sole criteria is that you want to trade. While I’m a believer in the view that just about anyone can learn, there are limits to that. Ignoring the obviously physical and mental disabilities, here are the ones I think are most important.

Lack of Impulse Control
If you cannot keep yourself from acting on impulse – meaning making snap decisions without a plan – then you’re likely not going to do well in trading. Successful trading means applying a consistent edge. That, in turn, requires a plan that is being followed, not making random trades when the mood hits.

There is probably some confusion here when the subject of gut instinct comes into play. Here’s the deal, though. If you’ve only just started trading, you have no gut instict. That comes from long experience. If you’re a rookie making gut trades, for your own good you should stop now. Any success you’ve had to this point is almost certainly a function of luck, not skill.

A Troubled Emotional State
We all go through periods when we’re in a mixed up emotional state. It could be relationship issues, family difficulties, the death of a loved one, stress at work, or any number of other things that put you off your game. These are not good times to trade. Granted, trading can be an escape from the emotional strains in some cases, but that’s only if the trader can consistently execute their normal work and strategy without it being impacted by what’s going on in the rest of their life.

Trading has a way of really exposing emotional problems, even among the most stable of individuals. If you’ve already got some mental strains going on, trading is likely to either make it worse, or to see you feed on that emtion in destructive ways – like trading angry. It is best to stay clear of the markets when these sorts of things happen if there’s any chance of spill-over or distraction.

Looking for a Quick Buck
Trading is not a get rich quick program. Any systems or broker ads that lead you believe otherwise are being deceptive. As any trader who’s been around more than a year will tell you, trading is a marathon, not a sprint. If you come into the market looking to make a fast killing you are almost certainly going to blow your trading account up because you’ll end up taking much too much risk. Basically, you’ll be a gambler rather than a trader. END_OF_DOCUMENT_TOKEN_TO_BE_REPLACED

END_OF_DOCUMENT_TOKEN_TO_BE_REPLACED 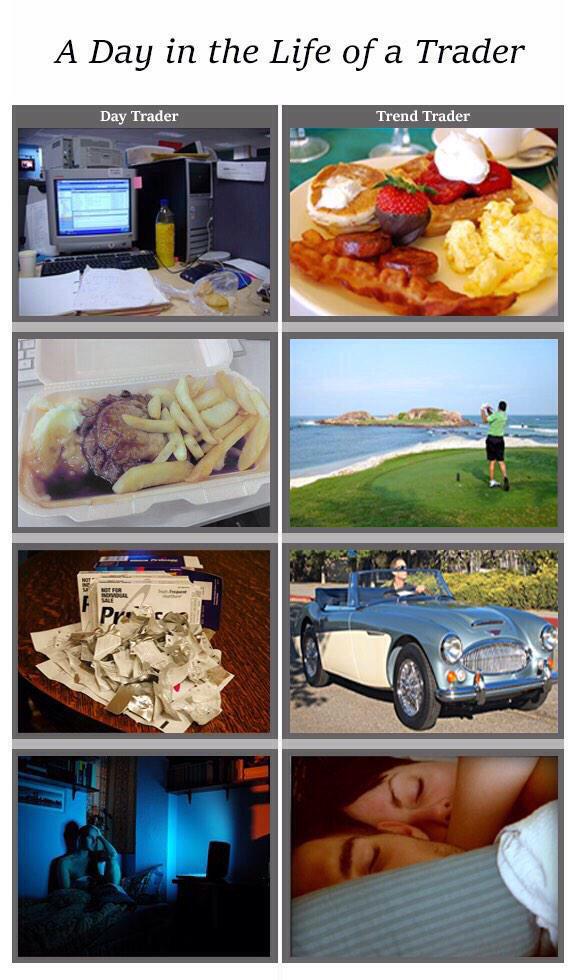 END_OF_DOCUMENT_TOKEN_TO_BE_REPLACED

Sometimes it seems like the investment community operates on the assumption that the world started in 1929 – or at least that the financial booms, busts and speculators preceding the 1920s are irrelevant to the modern investor. We think this is misguided. Just consider that this common worldview ignores an age where speculators lived in sprawling mansions on Fifth Avenue (as opposed to apartments in the same place measuring about 1/100th the size)! We imagine that there’s a lot to learn from looking at the past 300 years as opposed to the past 80. With this in mind; here we present what we believe to be the best trades of all time.