All banks and markets remain open

Today is a big day for traders around the world!  It is Fibonacci Day! 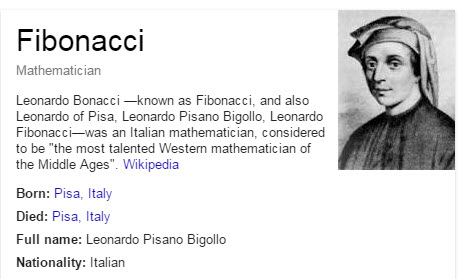 Why is it Fibonacci Day?  Well if you are from a country that uses the MM/DD format, 11/23 are 4 digits in the Fibonacci Sequence.  A Fibonacci sequence is a series of numbers where a number is the sum of the two numbers before it. For example: 1, 1, 2, 3…is a Fibonacci sequence. Here, 2 is the sum of the two numbers before it (1+1). Similarly, 3 is the sum of the two numbers before it (1+2).
The next two digits in the Fibonacci sequence are 5 and 8 (2+3 = 5 and 3 + 5 = 8).  That means 11/23/58 (2058) will be the biggest of Fibonacci Day’s. It is never to early to start preparing a celebration.
Let’s see, 2058 is in 43 years. That would make me 97 years young.  If I don’t make it, will someone please remember and be sure to give the day, the credit it deserves.
Happy Fibonacci Day.
PS. Arguably, the most famous media use of the Fibonacci Sequence was from the book and movie The Da Vinci Code starring Tom Hanks written by Dan Brown.  This is the scene where Hanks enters the Fibonacci Sequence as part of the clues left behind by Jacques Sauniere, the murdered curator. Sauniere raised his granddaughter, coaching her in endless puzzles. As an adult she became a cryptographer. When presented with the numbers in a scrambled form, she recognizes the sequence, and understands that it is part of a message.