If you trade options, you’d do well to have Scott Nations’ Complete Book of Option Spreads and Combinations (Wiley, 2014) in your reference library. It’s an intermediate-level book that explains the structure of more spreads than most people will ever trade but that they should understand nonetheless. A case in point: a conversion or a reversal, a combination that is rarely executed as a package but that “a smart retail trader might end up having on.” (p. 209) It’s better to know in advance what this position is and how to deal with it.
There’s an abundance of information available online about option spreads and combinations, and Nations of necessity covers much of the same territory. But he proceeds more analytically, and he deals with issues that most online descriptions ignore, such as ways to mitigate wide bid/ask spreads. Take, for instance, the long call condor. Nations looks at an AAPL call condor that, using midpoint pricing, costs 18.87 and that, buying on the ask and selling on the bid would cost 0.63 more. What if we were to replace the in-the-money call spread “with something that’s out-of-the-money and has bid/ask spreads similar to the bid/ask spreads of these other out-of-the-money options?” That is, what if we sold a put spread with the same strikes instead of buying that call spread—and again sold at the bid and bought at the ask? Instead of paying a 0.63 penalty, we now pay only 0.27. This “new, magical structure” is an iron condor. (pp. 201-202)
In eleven chapters this book deals with vertical spreads, covered calls, covered puts, calendar spreads, straddles, strangles, collars, risk reversal, butterflies, condors and iron condors, and conversion/ reversal. Every strategy is encapsulated in cheat sheets and, more importantly, is illustrated with examples, complete with tables and figures. Here, for instance, is the graph of a vertical spread he analyzes, which includes the probability of profitability—something he explains how to calculate on the previous page. 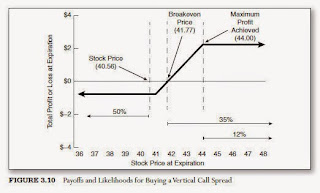 Unlike Nations’ previous book, Options Math for Traders, this one is math-lite. He confines his discussion of option pricing to a single chapter and refers the reader to his website Option Math to download a free spreadsheet that calculates theoretical option values using the Black-Scholes model and inputs supplied by the user.
But it provides an excellent conceptual framework for understanding spreads and combinations. With the help of this book the reader can progress from being a trader who uses options to an options trader.