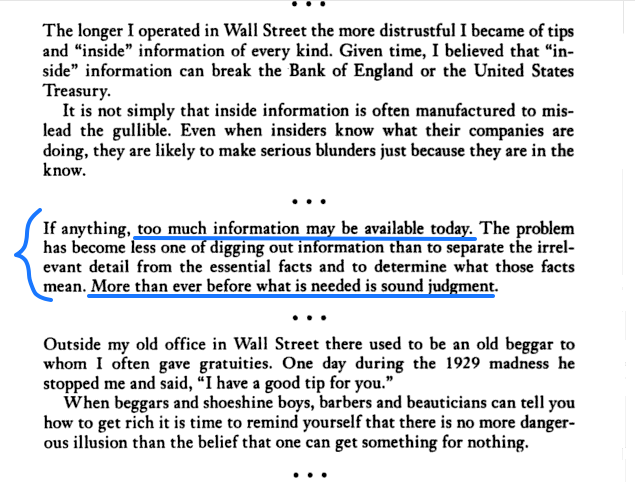 Bernard Baruch on inside information: “The longer I operated in Wall Street, the more distrustful I became of tips and “inside” information of every kind. Given time, I believed that “inside” information can break the Bank of England or the United States Treasury”.
Baruch adds that most “inside information” is designed to mislead the gullible and that corporate insiders are just as likely to be led astray by their “infallible” informational advantage and belief in the company. His comments closely resemble Jesse Livermore’s sentiments on stock tips and insider information.
Trading on tips: Echoing Joseph Kennedy’s anecdote about the stock-tipping shoe shine boy of 1929, Baruch relates his own tale of taxi drivers, shoe shine boys, and beggars offering hot stock tips and market analysis.

“Outside my old office in Wall Street there used to be an old beggar to whom I often gave gratuities. One day during the 1929 madness he stopped me and said, ‘I have a good tip for you’.”
“When beggars and shoeshine boys, barbers and beauticians can tell you how to get rich it is time to remind yourself that there is no more dangerous illusion than the belief that one can get something for nothing.”
Baruch on information overload: “If anything, too much information may be available today. The problem has become less one of digging out information than to separate the irrelevant detail from the essential facts and to determine what those facts mean. More than ever before, what is needed is sound judgement.”
Readers today may be amazed to hear that there was a problem of “too much information” back in 1957. After all, young people born into the computer age may regard even the recent pre-internet era as a technological stone age. However, in the context of Baruch’s times, the availability of financial information and the reach of mass media were far greater in the 1950s than at the turn of the 20th century, when Baruch was still a young man.
Now we find ourselves in the age of social media, where opinions, news items, and images constantly barrage our senses and vie for our attention. While our 21st century technologies have connected us (via broadband internet, satellite, and smartphones) to each other and to on-demand information like never before, they have also overwhelmed us with an enormous glut of noise and information. Scarcity of information has been replaced with a scarcity of available attention. The essence of Bernard Baruch’s statement is still true today.