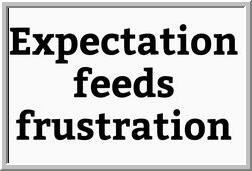 This situation will be familiar to many active traders:  frustration intrudes during the trading process and threatens to interfere with our best decision-making.  As the perceptive reader notices, this can even occur when we are relatively self-aware and in touch with that frustration.  How can we move past frustration?
The key is recognizing that frustration occurs when we have a need and that need is thwarted.  If we eliminate or change the need, the frustration melts away.  If I’m a perfectionist, I create many artificial needs.  Perhaps I feel a need to be 10 minutes early for every appointment on my calendar.  That will create frustration when I am caught in traffic.  If I can accept that I will be just on time or even a bit late once in a while, the traffic is no fun, but it’s also no threat.  Frustration is a function of expectation–and perfectionism creates excessive expectations.
So what is our trader’s need?  It’s the need to trade, the need to make money.  If the market isn’t making sense, there’s no trade to put on and no money to be made.  If the setup isn’t there, the trade isn’t there and neither are the profits.  If a bad trade is placed, the fruits of a good trade are erased and there go profits.  That same dynamic can also make it difficult to step away from screens, even though the trader recognizes in real time the signs of frustration.  It’s not OK to miss opportunity.