Realize that trading is based on probabilities, as such, every trade is unique. In other words, the past does not equal the future.


In turn these states allow us to remain…. END_OF_DOCUMENT_TOKEN_TO_BE_REPLACED

END_OF_DOCUMENT_TOKEN_TO_BE_REPLACED

Profits resulting from the violation of one’s own system or methodology constitute the most treacherous mirage of success. We’ve all been tempted at one time or another to suspend our collection of pre-defined rules (so painstakingly accumulated, yet so easily put aside) for the possibility that for this one particular moment, distinguished from all others, things might be different. And perhaps we were right — this time — and the register rung. Yet for those of us who have chosen the way of the System, the momentary suspension of discipline is a transgression beyond profit or loss. For no matter the what the outcome of the trade executed, the damage has already been done END_OF_DOCUMENT_TOKEN_TO_BE_REPLACED

END_OF_DOCUMENT_TOKEN_TO_BE_REPLACED 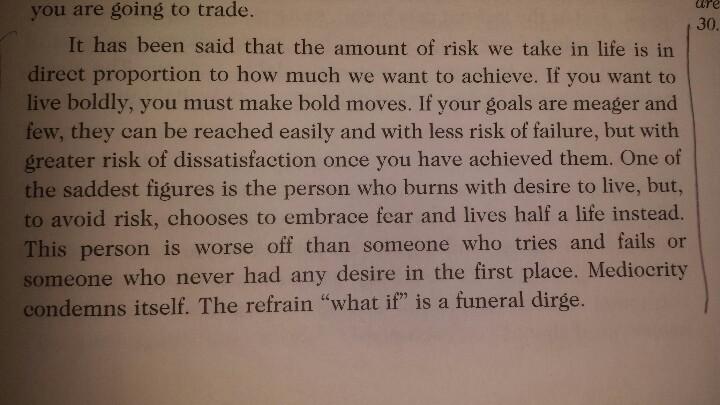 END_OF_DOCUMENT_TOKEN_TO_BE_REPLACED

As prices rise, they naturally attract more attention. As more and more people jump onboard the rally, its climb accelerates. But in all the excitement, there is a tendency to confuse account balance (the amount actually on your account) with account equity (the total value including the sum of your open positions). People begin to treat their potential profits as if they were already realized. This expectation can sometimes cause basic reversal signals to be overlooked.

Additionally, those who missed out on the opportunity early on, when the trend was still young, are becoming hypnotized by the length and size of the rally. Jumping onboard late is a risky game, however, as those who got in early will eventually need to take their profits. There is also a bit of the “greater fool” factor, as anyone who is still buying is now buying at a higher price, and from a seller who has reason to believe the move may soon be over. The idea then is that hopefully someone will keep on buying after you, at an even higher price, when you eventually decide to become a seller yourself.

When prices start falling, they awaken fear and panic. Fear is one of our most primal emotions, which explains why prices often fall faster than they rise. People holding longs run for the door trying to sell as quickly as possible, and short sellers motivated by the falling prices add their own orders to the mix as well. When those short orders are eventually covered in order to realize profit, there are temporary rallies which can give false hopes.

This crowd mentality frequently creates moments of market imbalance which can be capitalized upon, once one can learn to recognize the signs and interpret them correctly. Above all else, the key to developing this skill is practice.

END_OF_DOCUMENT_TOKEN_TO_BE_REPLACED

From ,What level Iam Bearish in EURO ….just search the blog and u will get the answer.

Do u want to know Trend of Any Pair ,Just send me

END_OF_DOCUMENT_TOKEN_TO_BE_REPLACED

“The market can stay irrational longer than you can stay solvent” – The way the market reacts to certain news or events may not seem rational at times, but there is no sense in trying to fight the market – it moves where it moves and does not care one bit about your opinion.

“A fool and his money are soon parted” – If you are not smart about where you put your money, you will most likely lose it.

“The trading rules I live by are: (a) Cut losses, (b) Ride Winners, (c) Keep bets small, (d) Follow the rules without question, and (e) Know when to break the rules.” – Rules are important, but following them blindly does not necessarily lead to success. Know which conditions produced those rules in the first place, so that when the conditions change, the rules can too.

“Amateurs Focus On Rewards. Professionals Focus on Risk.” – Experienced traders think first about how much they can lose on a trade, base their calculations on that, and then see if they are happy with the potential reward the trade offers. Novices usually do the opposite, blinded by the allure of quick riches.

END_OF_DOCUMENT_TOKEN_TO_BE_REPLACED

1) Relative Strength or Weakness- there’s no reason for me to pick from the mushy middle, as the biggest movers come from the best and worst 5% of the market.

2) Abnormal Volume- it can be abnormally high or abnormally low, but I’m looking for stocks that are doing something different that they’ve done in recent days or weeks.

3) Abnormal Range- again, high or low tells me something…average tells me nothing.

4) Identifiable Support(Longs) or Resistance(Shorts)- I have no need to be the first, that’s for the really brave and really smart(maybe).  If the idea is that good, I’ll have days/weeks/months to milk it…in case you haven’t heard, the second mouse gets the cheese.

4) News Absorption- I like to participate AFTER news events…it gives me a good idea of the temperament of a stock’s owners. It may have broken out from a base.  It may have been crushed but then built a base.  It may have reacted poorly to a “great” report. In any case, I want to see how a stock reacted the last time there was real news, and position myself on the side that has taken control since then.

6) Doubt- this is a tricky one, but our ideas should not be SO obvious that our relatives and neighbors love the idea.  Buy worry, short hope.  Buy after panic, short after euphoria.  I’m not saying to ignore an idea because your Twitter stream agrees with you…haven’t we filtered our list to only those we respect?  But take a second to check your spot on this curve, and where you sit on this idea.